'The Tonight Show Starring Jimmy Fallon': Out With The Old 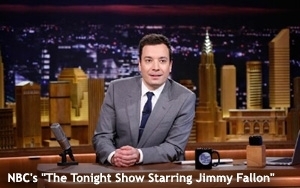 “The Tonight Show” last night didn't simply usher in a new era in NBC's long-running late-night franchise. It also relegated Johnny Carson to the stuff of legend -- a long-ago entertainer from another time who with great skill and style took over a talk and variety show that Steve Allen and Jack Paar had hosted to much acclaim and made it his own. “Tonight” and Carson were synonymous with each other for so long that when Carson left the show and Jay Leno took over in 1992, it felt for the first few months of Leno's tenure that he was simply continuing his long-standing part-time gig as Carson's permanent guest host for a longer stretch than usual.

Leno took a lot of heat during his first year as “Tonight” host -- because he was someone else hanging out in Carson's space. It wasn't until more than a year after he inherited the show that he figured out why he didn't quite fit. Leno in 1993 took “Tonight” to 30 Rock for a week, to a much smaller studio than he was used to in Burbank, and suddenly it felt like his gig rather than that of his predecessor. Changes were swiftly designed and executed back in Burbank, and Leno settled back in as the new king of late night for more than twenty years.

Fallon had no such bump last night. Everything about his “Tonight” was so completely different from what it had been less than two weeks ago that I doubt thoughts of Jay Leno or Johnny Carson crossed anyone's mind, except when Fallon graciously acknowledged all five of his “Tonight” predecessors (including Conan O’Brien) at the top of the show.

And what a show it was -- sending the message, as clearly as possible, that “Tonight” was now something completely different, although it was returning to its roots in New York City. At no moment was that more dramatically emphasized than when U2 performed at the Top of the Rock with all of lower Manhattan on fantastic sunset display behind the band.

New host, new city, new studio, new band (“Late Night” transplant The Roots): In truth it felt more like a powerful “Late Night” upgrade than a “Tonight” reboot, but the takeaway was the same. This was something totally new. That point was made even in the smallest details: The cavalcade of stars that turned out to pay Fallon the $100 they had lost when they bet against him ever hosting “Tonight” included Joan Rivers, Carson’s first-ever “permanent” guest host who was famously banned from “Tonight” back in 1987 when she launched her ill-fated late-night talk show on the then-new Fox network and so thoroughly pissed off Carson that she was never allowed back -- not even during the 22 years that Leno occupied the throne. I can't wait for Fallon to have her on as a featured guest.

Equal parts interviewer, comedian, singer and dancer, and a terrific impersonator, Fallon is a strikingly qualified host for a program of this kind -- an endlessly cheerful fellow who always comes off as a fantastically talented, yet genuinely humble ordinary guy with one of the best jobs in the world. It will be fascinating to watch him age in this gig. As he does, he will provide thousands of hours of entertainment to millions of people, many of whom will one day look upon him as their grandparents' “Tonight” show host. That thought should give a few of us a big chill.

If I have one first-impression complaint about the new “Tonight,” it's with the studio itself, which came off on television as thoroughly sterile. Maybe it's the color palette. All those browns and grays and blues -- accented by bright flat lighting – gave it the soul-deadening feel of a corporate conference room. And the backdrop may be the least exciting image of New York City at night that I have ever seen. (Note to executive producer Lorne Michaels: Call in the artists who constructed the dazzling city of Chicago backdrop for the CBS comedy “The Crazy Ones” and have them design a new one.)

The new “Tonight” studio was so cold and uninviting that I had to briefly click over to CBS' “Late Show with David Letterman” and warm up a bit. I never realized how colorful and welcoming Letterman's environment was until I spent some time in Fallon's frosty new home. Interestingly, Dave was talking with Kevin Spacey about the second season of “House of Cards” and how streaming services like Netflix were going to take over all of television. That gave me the chills all over again.