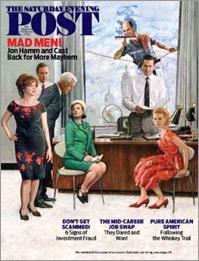 It may look like a Norman Rockwell setting, but the cover story of next week's The Saturday Evening Post is guaranteed to be anything but, as it sets the stage for the final season of AMC's "Mad Men."

Written by "legendary" Hollywood reporter Jeanne Wolf, the cover story focuses on how the cast of the Madison Avenue noir series have grown individually over the course of seven seasons, and why "fans project so much love and hate on their characters."

The issue also pays homage to the "Mad Men" era with a feature on the “new” look of vintage ’60s-era art and advertising from the pages of The Saturday Evening Post.

As it turns out, the cover is homage to an actual “Mad Men” era cover of the magazine,the one Rockwell drew for the September 17, 1960 edition of the magazine (see side-by-side versions below).

“The coolest thing about the ‘Mad Men’ Post cover, is that it's a direct knock-off/homage to a real cover,” observes MediaPost Creative Director Jonathan McEwan. “I love that Peggy is sitting as the original secretary did, with her heels hooked on the crosspiece of the chair.”

The man who brought “Mad Men” to the television screen, creator Matt Weiner, meanwhile, is the one depicted as the man washing the window. 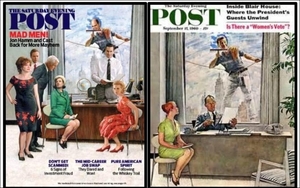