VentureBeat on Wednesday released a report ranking the top 10 marketing automation vendors for small and medium-sized businesses (SMBs), as judged by over 1,000 marketing professionals.

Hubspot beat out Salesforce for the top spot, while Marketo was ranked third.

In respective order, SAS, Eloqua, IBM, Act-On, InfusionSoft, LoopFuse and Silverpop round out the top 10.

Despite ranking third overall, Marketo was tops in terms of user-friendliness. The report also notes that Act-On Software is popular among growing businesses, while InfusionSoft offered the lowest cost. The report also rates each vendor for its Website content optimization and Web content targeting (see image below).

“Perhaps the most interesting news in the report is that more than half of all companies using marketing automation use more than one system,” stated John Koetsier, VentureBeat's product chief. “And shockingly, 44% use three or more.”

VB Intel will “aim to be a platform for research that will deliver real-time intelligence at an affordable price for SMBs,” per a release. It's set to launch this summer. 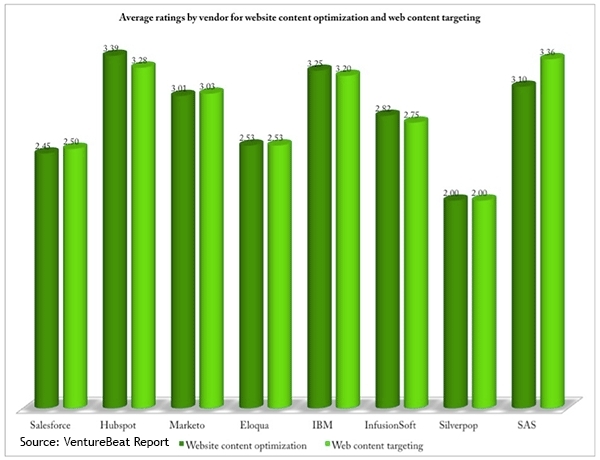