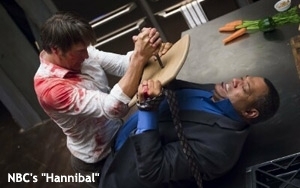 With the return tonight of NBC’s “Hannibal,” CBS’ “The Good Wife” can no longer enjoy the distinction of being the only “basic-cable quality” drama on broadcast.

Network executives are generally put off by that distinction, asserting that many of their dramas are just as good as the best on basic. But that simply isn’t true.

In this era of AMC’s “Mad Men,” “Breaking Bad” and “The Walking Dead”; FX’s “Justified” and “American Horror Story” (and, until this most recent season, “Sons of Anarchy”), and Sundance’s “Rectify” and “The Returned,” among others, most of the shows that broadcast networks offer simply can’t compete as adult entertainment. (That isn’t to say they have to: There isn’t a basic cable network out there that wouldn't welcome the ratings enjoyed by many broadcast shows, especially the procedural crime dramas on CBS and the Shonda Rhimes serials on ABC.)

For the last few years the only one that deserved that specific praise was “The Good Wife,” whether the broadcasters wanted to believe it or not. (Prior to that, Fox’s “24” was the broadcast series that seemed the most cable-worthy. For a hot minute last year it looked like Fox’s “The Following” might be similarly special, but that didn't last.) Going forward it must share that informal honor with “Hannibal,” which comes roaring back tonight with even more of the boundary-busting ferocity it unleashed during its abbreviated first season.

“Hannibal” last year didn't strike me as an example of the best of broadcast or as being “basic cable-worthy,” perhaps because its unrelenting weirdness took some time to process. Many of its early episodes seemed not to make much of an impact beyond the understandable responses that come with exposure to nightmarish imagery (naked bodies used as a growing medium for mushrooms, women impaled on antlers, etc.). I think it needed time to settle, like one of the title character’s distinctive culinary creations; for its very varied ingredients to marinate into a television offering that should probably be described as rewarding but not savory. It still amazes me that this show was created by Bryan Fuller -- it's the complete opposite of his bright and sunny love story “Pushing Daisies,” one of the most delightful series ever to come along. Fuller is something of a genius: There is nobody else working in television today who brings such distinctive creativity and an obvious love of painterly images to his work.

As the first season of “Hannibal” progressed and its cast began to expand it became increasingly irresistible. For me, the crossover point as far as my own engagement was concerned came with the addition of Gillian Anderson as Hannibal Lecter's psychotherapist. Their scenes together as doctor and patient are the best I have seen since those shared by Lorraine Bracco and James Gandolfini in “The Sopranos.” Once I locked onto Anderson, my appreciation for everything else the show offered began to deepen -- especially the performances of Hugh Darcy as Special Agent Will Graham, a profiler who specializes in apprehending serial killers, and Mads Mikkelsen as Lecter, a murderous forensic psychiatrist with rarified tastes.

Season Two opens with an especially strong episode that should reinforce the rabid devotion of its existing fans and prove comfortably accessible to new viewers who are interested in sampling something completely different from anything else they are currently watching on television (or anything they have ever seen, for that matter). They won’t have to wait long for “Hannibal” to grab them all over again or for the first time. The episode begins with a flash-forward to a brutal fight between two characters that adds a whole new dimension to the stories already being told. It's a time jump that enhances everything about the show without seeming like a narrative gimmick or lazy shortcut.

The prolonged break between Season One, which ended in June, and Season Two, which begins at 10 p.m. tonight, only heightened my interest in “Hannibal.” That's where this show and NBC's scheduling of it tops even “The Good Wife” in reflecting the basic cable model. As we know from basic and pay cable networks and streaming services, a prolonged break does not derail momentum for a quality drama. Instead, it fosters game-changing anticipation for its return.

Expectations for any broadcast series are relatively low on Friday night -- for many years the home of one of the highest-rated series of all time, CBS' “Dallas” -- but the night still has a pulse, as we have seen with CBS' “Hawaii Five-O” and “Blue Bloods” and ABC's “Shark Tank.” It would seem to be a great place for a show with a potent young following to continue to grow, especially when paired with a series like “Grimm” -- another horror show, albeit one that shares nothing in common with “Hannibal.” What a shame that “Dracula” didn't work out -- NBC would have had a great night of horror on its hands.