Does ABC Have A Hot Supernatural Hit In 'Resurrection'? 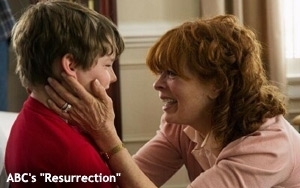 When I watched the pilot for ABC’s “Resurrection” back in June I thought it was the best new show among the many the network had introduced to advertisers and the press during the 2013 upfront. In fact, I thought it held more promise than any of the 2013-14 freshman series that any of the networks had presented last May. (NBC’s “The Blacklist” proved me wrong.)

Even though I continued to champion “Resurrection” as one of the new season’s best, I resigned myself to the fact that it would probably come and go in a blip, because ABC had scheduled it for a March premiere. As we all know, for whatever reasons, midseason is where ABC sends many of its new series to die, especially dramas -- unless they are produced by Shonda Rhimes (and even the mighty Ms. Rhimes had a midseason flop in the medical drama “Off the Map”). It seemed that ABC instead was determined to put all of its marketing and promotional power behind “Marvel’s Agents of S.H.I.E.L.D.,” once the current season’s most buzzed about and eagerly anticipated new show, but now a fading disappointment in dire need of an expanded narrative. Who thought viewers would sit through more than a half season of episodes breathless with anticipation to learn exactly what happened to Agent Coulson in the feature film “The Avengers”? That story should have been wrapped by the November sweep cycle. The writers are still tossing viewers crumbs about it, long after everyone has stopped caring. And this is only one of the many problems plaguing “S.H.I.E.L.D.”

I digress, but only because I have thought all along that “S.H.I.E.L.D.” (along with “Betrayal” and “Lucky 7”) received the early attention and support that should have gone to “Resurrection,” a deeply emotional and fascinating drama about dead people who miraculously return to life not having aged, looking none the worse for wear and with no memory of having died. The numbers for its long-awaited premiere on Sunday would seem to reinforce my initial assessment.

As of this morning, ABC reports that “Resurrection” attracted 13.9 million viewers in the 9 p.m. time period on Sunday. That makes it the No. 6 show of the week among total viewers and the network’s most-watched Sunday drama debut since the premiere of “Brothers & Sisters” on September 24, 2006. It was largely a self-starter, increasing the young adult audience from its lead in by almost 60 percent. “Resurrection” was also the week’s top broadcast drama among adults 18-49.

Keep in mind that “Resurrection” performed as well as it did opposite the first new episode in several weeks of CBS’ “The Good Wife,” the premiere of the exciting new documentary series “Cosmos” on Fox and a number of its sibling cable networks, the season finale of HBO’s immensely popular drama “True Detective” and a new episode of the most powerful scripted series on all of television, AMC’s “The Walking Dead.”

Also working against “Resurrection” was the premiere last fall on suddenly super-hot Sundance of the extraordinary French series “Les Revenants,” known here as “The Returned,” which critics across the land raved about and included in their Top Ten lists for 2013. Although the two have many similarities -- they’re both about dead people who miraculously return to life not having aged, looking none the worse for wear and with no memory of having died -- they are actually based on two completely different sources. (ABC’s “Resurrection” is based on the book “The Returned” by Jason Mott, which ups the confusion factor. Sundance’s “The Returned” is based on the 2004 movie “They Came Back.”) Furthermore, one might think no other American series about zombies would hold up against comparisons to “The Walking Dead.”

Indeed, I’m sure many people tuned in to “Resurrection” expecting a new take on the zombie thriller -- a genre that is currently all the rage in popular entertainment. Obviously they found something different -- a series that is all mystery and no gore, with a huge helping of heartfelt drama, often focused on the impact that the resurrected have on their loved ones. That might sound like the kiss of death, but the audience for “Resurrection” increased throughout the hour, which means viewers liked what they were watching and let their friends and families know, and that channel surfers were struck by what they saw and were compelled to stick around and see where it was going.

Where is “Resurrection” going? Only ABC can tell us, and it won’t if it knows what’s good for it. “Resurrection” isn’t nearly as moody or atmospheric as “The Returned,” but it is still an impressive production. Its overarching mystery is infinitely more seductive in the emotional sense than that surrounding Agent Coulson, and it can play out for many seasons if correctly handled. I sure hope it holds up. Meanwhile, I can hear top programming executives at every network ordering their teams to find the next supernatural success and have it ready to announce by May. Yesterday’s vampires are today’s zombies. Are werewolves next? Let the games begin.

tv
1 comment about "Does ABC Have A Hot Supernatural Hit In 'Resurrection'?".
Check to receive email when comments are posted.
Next story loading