We can’t offer you $1 billion, but we can offer you something better.

Actually, wait. Maybe not better. But you could still win free entry to an OMMA RTB event of your choice (New York, London, or Los Angeles) by playing along.

In honor of the NCAA College Basketball tournament -- colloquially known as “March Madness” -- RTM Daily has created its own bracket…for buzzwords.

The Buzzword Bracket pits 64 of the buzziest buzzwords you hear in ad technology against one another in a single-elimination tournament. By the end of it, we will have a 2014 Buzzword champion.

Shoot, I forgot to include “buzzword."

Unlike the real tournament, these words do not play basketball against one another, so to “score” the rounds we’ll use Google News as the impartial judge. I’m sure there is technology out there that could score this more precisely, but this is meant to be simple and fun, so we’ll leave it with “the word with the most page results wins.”

One other note: since broad words like “Facebook” or “video” will generate plenty of non-advertising related search results, we’ll try to qualify the results by adding words like “advertising” or “marketing" to the queries.

You can see the full bracket here, created using betterbracketmaker.com. It will be updated after each round. Below is a full list of each buzzword competing. (Yes, we could have done a 128-team bracket.)

Leave predictions in the comment section below for the Final Four, the final two, and the ultimate winner. To serve as a tiebreaker, also predict the total number of page results the winning word will accumulate over the course of the tournament. You can use the hashtag #buzzwordbracket on Twitter. 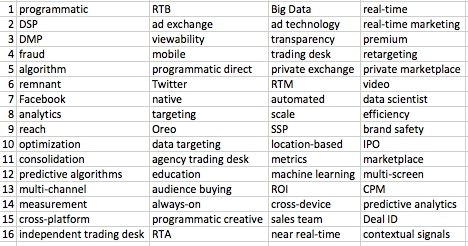