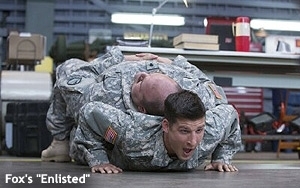 It’s that time of year when the fearsome fates of on-the-fence shows are front and center in the television business. With every passing year the list of shows with uncertain futures grows longer, arguably because the ratings bar has been set so low that even the weakest situation comedy that draws an audience equal to the number of people passing through your local shopping mall on a busy Saturday is in contention for renewal. That has a lot to do with the feverish efforts of critics and bloggers mounting massive online campaigns to save just about everything.

Such thoughts pass through my mind every time I watch the Fox series “Enlisted,” one of the funniest comedies on television, and also one of the lowest-rated. This is a show that is absolutely worth saving. To use an often overused term, it is a complete gem. It’s not just funny and entertaining; it is also one of the nicest shows on television and one of the most respectful. I say that because it’s set on a military base in Florida (the fictional Fort McGee) and all of its characters are military people, and even though much of what they do is played for laughs the show never looks down on the men and women who so bravely serve in our armed services. No matter what crazy comic situations the show’s writers put these characters in they always balance their humor with heart.

“Enlisted” doesn’t only show respect for our current military: It also honors veterans of previous wars, some of whom weren’t treated particularly well by the media or their fellow Americans at the time they served. A recent episode featured three Korean War veterans (winningly played by Barry Bostwick, Dean Stockwell and Stacy Keach) who were visiting Fort McGee for the funeral of a platoon mate. The emotional undercurrent through the episode (and especially at the end) was never over-played, but it was never far from the surface, either, even when the three old-timers indulged in a few pranks of their own, like stealing a Humvee. (That led to one of the funniest lines of dialogue on any sitcom this season, in which the young soldiers tasked with caring for the vets were dressed down for being tricked by three “old men” into giving them “a hummer.”)

As silly as the episode was, the funeral service at the end (and its impact on the younger soldiers) was deeply profound. That’s the thing about “Enlisted.” Its humor is as edgy and contemporary as that on any other show, but the way it can turn on a dime and make viewers feel and think about the lives of other people -- about matters of love, valor, honor and respect -- is highly uncommon and hugely welcome in the increasingly coarse and corrosive world of scripted TV comedy.

Another episode featured a parade in Seacord, the town where Ft. McGee is located, an occasion that degenerated into all manner of comic madness, which had more to do with errant townspeople than military personnel. But the sequence included shots of parade-goers cheering the troops who were marching -- and most movingly, several veterans from the Vietnam War saluting as they passed by. One of the veterans was holding one of those sadly iconic black and white POW-MIA flags. It was a powerful moment, even though the servicemen and women they were saluting were performing maneuvers with shovels and brooms, as they were on horse-poop removal duty in the parade.

“Enlisted” is that kind of show. I think more careful thought goes into every episode of this series than entire seasons of others.

None of this would work if the cast wasn’t perfect. There isn’t a weak player in the group. Geoff Stults, Parker Young and Chris Lowell are simply sensational as brothers Pete, Randy and Derrick Hill, respectively. There hasn’t been a comedic or dramatic moment yet that each of them hasn’t nailed, including the occasional scenes in which Pete, a staff sergeant who outranks his brothers and who served in Afghanistan, continues to deal with PTSD in a very realistic manner (rather than the usual TV histrionics).

Also outstanding is Keith David as no-nonsense Command Sergeant Major Donald Cody. He’s giving one of the great comedic performances of the season. In a perfect world David would be acknowledged with an Emmy nomination later this year.

The rest of the cast is similarly fine, able to deliver funny lines, engage in physical comedy or stop to acknowledge something serious in so natural a manner it’s as if they had lived the life. Actually, a few of them did. Watch “Boot Camp: Arrival,” the first of a six-video series available on YouTube chronicling the experiences of “Enlisted” cast members who volunteered for basic training while preparing for their roles on the show. Collectively, “Boot Camp” is as amusing and stirring as the series itself.

Fox recently renewed several series for the 2014-15 season including its low-rated comedies “New Girl,” “Brooklyn Nine-Nine” and “The Mindy Project.” Simultaneously it cancelled “Raising Hope,” the crazy-smart comedy that plays adjacent to “Enlisted” on the network’s low-rated Friday night schedule, and it moved its limp new drama series “Rake” to Friday, presumably to let it die there.

These moves leave “Enlisted” nestled between a dying show and a dead one on a bad night, and that’s an outrage no matter how one looks at it. Given the significance of this show, the very least it deserves is a shot at a second season in a much better time slot. I have no knowledge of Fox’s plans for this fine series, but if the network continues to compromise it and then kills it, executives there are going to be asking for trouble. They could do a lot worse than support “Enlisted” -- in fact, they already have. They renewed “The Mindy Project,” didn’t they?