'American Idol' Is So Overdone It's Killing Itself 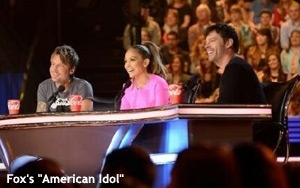 One of the biggest stories of the television season is the continued audience erosion over at Fox's “American Idol.” On the one hand, substantial ratings declines should be expected in any franchise that is in its 13th season. On the other, it seems to me that the many changes in “Idol” this season could actually be contributing to its problems.

Before proceeding, it should be stated that “Idol” remains arguably the most fascinating broadcast television program of the millennium to date. Its continued power, regardless of its losses, is undeniably impressive for a show as old as this one. It has sustained that power in a broadcast arena that has been super-saturated with similar talent shows in recent years; some of them (NBC's “The Voice,” ABC's “Dancing with the Stars”) perhaps foolishly hastening audience fatigue by running two cycles per season. “Idol” never went that route. I am certain that has something to do with its formidable performance.

“Idol” has been through a dizzying series of season-to-season changes for at least half of its run, mostly involving the revolving cast of characters that have populated its judges table since its three original voices of authority -- Simon Cowell, Paula Abdul and Randy Jackson -- began departing for other pastures. Throughout, it has remained true to its original premise of dream fulfillment for gifted young unknowns who might otherwise never get the chance to demonstrate their talents -- or who might be looking for an easy path to stardom. That's not to say the demands “Idol” places on its contestants are easy to navigate, but they are less time-consuming than spending years playing in small bars and clubs and posting videos online hoping to be discovered.

It still has its strengths, but there is nevertheless something off about “Idol” this year. It is suddenly spectacularly over-produced in the manner of “The X Factor,” one of the more notable flops in the recent history of talent competition shows. Everything on “Idol” is bigger this year, from the stage to the studio to the dazzling presentation of each contestant as someone who has already achieved stardom rather than a shot at something at which they will in all likelihood fail. This is largely a function of production design and editing and overall creative direction, the collective impact of which seems to dwarf the efforts of the contestants themselves. Some of them seem lost in the spectacle of it all.

Maybe that's why, after several weeks of live competition shows, I don't feel invested in any of them. I can't even remember most of their names. That's a first for me. Even last year, widely regarded as the worst for “Idol” because of the mismanaging of Nicki Minaj and Mariah Carey, it was already clear at this point in the competition that the judges had despite their personal conflicts identified five fantastically talented young women. They whiffed with the guys, but who cared? “Idol” hadn’t seen that kind of girl power since Season 3, which included Jennifer Hudson, Diana DeGarmo and Fantasia Barrino in its top ten.

Conversely, the best reason to watch “Idol” this year is to enjoy the presence of its fantastically talented and attractive trio of judges -- Keith Urban, Jennifer Lopez and Harry Connick Jr. Their combined star power is blinding. It's almost impossible to take your eyes off them. The world around her seems to disappear when the camera is on Lopez. Urban and Connick are genuinely skilled at judging, and when they get playful -- as they did this week when they briefly switched seats and imitated each other -- they are great fun to watch. But these three totally eclipse the unknown kids on the stage, which should come as no surprise when a cluster of giant stars come together as one. (That never happened last year, when each of the four celebrities at the table seemed to grow increasingly colder toward each other as the season progressed.)

To put that another way, the judges are having and making all the fun. The rest of the show has felt long, slow and often quite boring despite (or perhaps because of) the overstimulating environment in which the contestants are competing. Part of the problem is that the contest itself has become so resolutely earnest. The producers and judges doubled down this year in their efforts at finding and developing deserving talent. But they seem to have forgotten that they are making a television show -- that it is more important to engage and entertain millions of people every week than to showcase a group of young people who are eager for a short-cut to stardom. This arch earnestness began during the audition shows, which used to be entertaining, if only to hear what Cowell would say to the truly talent-challenged. When someone like Sanjaya Malakar actually survived the early rounds of competition and made it to the top ten the audience almost always responded, either with cheers or jeers. That was part of the fun.

On top of this, the voting process has become so monstrous that it's easy to pull back from it all and lose interest unless one is addicted to technology (or very young, which may be redundant). Voting via Google allows viewers to add up to 50 votes per contestant. The thrill of making one or two phone calls to support one's favorite contestant and then learning the following night that millions of people agreed is completely gone. “Idol” is more interactive than it has ever been, but that interactivity is less personal than ever before.

music, tv
3 comments about "'American Idol' Is So Overdone It's Killing Itself".
Check to receive email when comments are posted.
Read more comments >
Next story loading