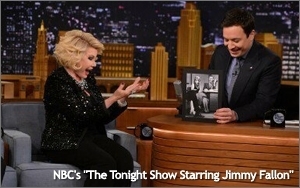 It’s been a week of nostalgia-inducing television, with the death of Will Gardner on CBS’ “The Good Wife” recalling major narrative milestones on broadcast series from the Seventies and Eighties and the live telecasts on TV Land of “Hot in Cleveland” and “The Soul Man” evoking memories not only of the days of live television but of the much-missed comedy-variety hour as epitomized by such classics as “The Carol Burnett Show.”

So what better way to end the week than with Joan Rivers’ triumphant return last night to NBC’s “Tonight Show” after being banished by former hosts Johnny Carson and Jay Leno for approximately 28 years? Yes, she appeared for about 20 seconds on Jimmy Fallon’s first night as host of “Tonight” along with many other giant celebrities to welcome him to the show. But she didn’t say anything then. Fallon and his producers’ decision to include Rivers in that cavalcade of stars (plus Kim Kardashian) after so many years of bad blood between network and comedienne was inspired -- and it was as strong a signal as any that things were going to be different at the new “Tonight.”

If this hadn’t been a week already filled with unforgettable moments I might suggest that The Roots playing the “Tonight Show” theme from the Carson era as Rivers joined Jimmy Fallon onstage was the most memorable of all. Having grown up watching Carson, my response to hearing that song was very much like the one I still have whenever I hear the opening theme of “Dallas.” It puts me there.

Rivers was so funny last night she frequently reduced Fallon and tough-guy guest Russell Crowe to gales of helpless laughter. The first story Rivers told was about being stranded in a broken-down stretch Mercedes limo en route to NBC that took over two hours to fix.

“I’m thinking, the Germans killed six million Jews, you can’t fix a f-ing carburetor?” Rivers exclaimed. (The woman knows how to keep network censors busy with her love of f-bombs.)

Fallon, Crowe and the studio audience lost it. When Fallon regained his composure all he could say was, “Welcome back to the network, Joan.”

Fallon almost died when Rivers said she and her “girlfriend” got matching vagina rings to commemorate her return to the show. She needed to sit on a donut because her ring was causing discomfort. “Mine is killing me,” she said, “but I spoke to Bruce Jenner and hers is fine.”

In a profound if fleeting moment, Fallon produced a vintage black-and-white image of Rivers being interviewed by Carson on “Tonight” from the years before NBC moved the show to Burbank. “Tonight” then was taped in the same studio it returned to this year. Rivers recognized the picture immediately as having been taken during her second “Tonight” appearance. “I had been working for eight years in Greenwich Village, and nothing,” she recalled. Pointing to Carson, she added: “He said, God bless him, ‘You’re going to be a star.’ It changed my life.”

There was only brief talk about Rivers’ long banishment from the network. (That isn’t entirely accurate, because she did appear on “Late Night with Jimmy Fallon.” She may have appeared on “Late Night” with David Letterman or Conan O’Brien, as well. Who can remember? It’s “Tonight” where she famously wasn’t welcome.)

I can’t help but think that the television audience has missed a lot over much of the last four decades by not being able to enjoy Rivers as a regular presence in late-night. That’s certainly where her increasingly risqué humor plays to the best effect and the least potential offense. It’s not that we’ve suffered a shortage of appearances by her, especially on television. Her E! series “Fashion Police” is a hit (and one of TV most reliably funny shows), her WE reality series “Joan Knows Best” (which begins its fourth season tomorrow night) is a success, she appears regularly on QVC selling her many signature beauty and fashion products and she has continuously made the rounds of almost every talk show on television. She also tirelessly works comedy clubs around the country like a person one-third her age.

But why haven’t we seen more of her post-prime? She was the first woman to enjoy regular jobs in that daypart, first as Carson’s permanent guest host for several years in the Eighties (a great gig, given all the vacation time Carson enjoyed) and then as the host of her own late-night talk show on Fox when it launched in 1986. (It was Rivers’ decision to leave “Tonight” for Fox that so infuriated Carson he refused ever to speak to her again, let alone allow her on “Tonight.” Leno throughout his tenure there apparently honored Carson’s grudge.)

Rivers’ nightly show -- the very first program of any kind telecast on Fox -- was a notorious disaster, leading to all kinds of misfortune in her personal and professional life. The extreme dramatics of the stormy situation and its aftermath may explain why she was never again seen on “Tonight” until Fallon became host -- but it doesn’t explain, with the exception of Chelsea Handler’s post-prime show on E!, which technically doesn’t qualify as a late night program, why there hasn’t been a regular female host on a late-night talk show since Rivers’ combined run on NBC and Fox three decades ago.