Shut Up! 28% Of Companies Still Un-Mobilized 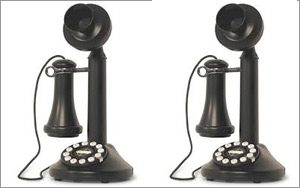 Living here in the mobile marketing bubble (where we have been talking about this stuff since 2003), it is too easy to believe most of what we talk about is old hat by now. I mean, everyone started scrambling several years ago to catch up to the mass migration to handsets, no? There were headlines and everything, weren’t there? I am sure I recall Brian Williams mentioning this “mobile thing” at some point. My 75-year-old mom is the only one who isn’t down with mobility, right? In fact, at this point, I think it is safe to say that we want to keep outside the mobile media bubble the people who are still out there. At 55, I really don’t want texts from mom, to be honest. It is bound to be a frantic question about how to rewind the DVD now that they are done with it.

It turns out that a good chunk of corporate America still rewinds their DVDs too. According to a survey of 2,300 CIOs of companies with 100 or more employees in 23 cities, Robert Half Technology finds that 28% say they have no mobile strategy.

Now, to be sure, that stat is in response to a pretty broad question about describing a “mobile strategy” that could be understood as consumer-facing or b2b. Still, the idea that any company in a digital age is not considering how mobility figures into either piece of the business is pretty striking. It may not be surprising that the industry in the lead of the mobile laggards is health care, where 36% claim no mobile strategy. In our own recent Healthcare Marketing event in Washington, DC it was apparent that many companies in this segment are simply unsure and unclear about how to proceed digitally because of regulatory restraints. Guidelines for drug company presence and interaction in the social media space, for instance, are still muddy. The mobile screen poses enormous disclosure challenges for pharma as well.

On the other hand, business services and retail were the segments with the largest share of companies pursuing blends of mobile Web and apps -- at 65% and 63% respectively.

But still, even apart from understandable outliers like health care, the level of uncertainty about mobility remains pretty clear in the Robert Half survey. For instance, although about 80% of mobile media time is spent in apps, even mobilized companies are reticent about the platform. More than half (58%) of CIOs say their company neither has an app to serve either customers or clients or plans to offer one. And 22% expect one in the next year. Only 18% of companies are using the app platform already.

From inside the bubble that seems shocking on the face of it, I expect. And yet it remains an open question in my mind whether many companies really do need or want a dedicated app. I have argued for a while that the app ecosystem is in many ways a step back in interactivity that begs for a 2.0 rethink. On the one hand, apps allow for a design richness, immersion and clarity that the Web only dreams of. But in the process we broke the discovery, indexing and hyperlinking that made the Internet such an amazing resource. Deep linking and OS-level app searching may get us there eventually, but I think we really need more leadership from Apple and Google in getting us to apps 2.0.

The most understandably daunting weakness in the app ecosystem for most businesses probably remains distribution. We have created this ridiculously costly and convoluted first response to a billion-app economy that is making buckets of money for Facebook and the app analytics companies that are all morphing into ad nets. But it still seems daft to me that so much money and focus in mobile advertising is on app distribution. Somehow it harkens back to the mobile economy of 2005, when most of the early m-ads were really aimed at selling mobile content subscription plans rather than a broad range of goods and services.

It reminds me of a quip from James M. Cain’s Depression-era hard-boiled classic “The Postman Only Rings Twice.” One of his characters describes a modern America made up of restaurants: “Whole goddam country lives selling hot dogs to one another.”

apps, mobile
1 comment about "Shut Up! 28% Of Companies Still Un-Mobilized".
Check to receive email when comments are posted.
Next story loading