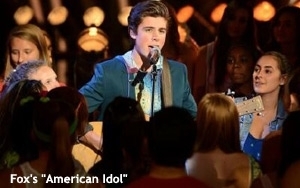 If what I saw last night was any indication -- and as a long-time supporter it pains me to say this -- there is simply no hope for Fox’s “American Idol.” Lately, it is so easy to find fault with this once glorious show that it hurts.

This realization set in immediately following the performance of contestant Sam Woolf (pictured), the one male contestant on the show that fully meets the qualifications for a recording deal as adhered to by music industry executives. He can sing. He isn’t threatening. Even more important, at least to the business, is that he’s good looking in that cute-boy-band-singer way. So he’s marketable. But he isn’t the most talented or the most popular of the current competitors on the show. Indeed, last week the audience voted Sam off -- to the shock and horror of superstar judges Keith Urban, Jennifer Lopez and Harry Connick Jr., who hurriedly decided to use their one “judges’ save” of the season and haul Sam out of the fire.

Anyway, here’s the moment when “Idol” came apart: In his first performance since being saved, Sam focused with laser-like intensity on the camera as he sang Cyndi Lauper’s “Time After Time.” I’m not a fan, but I gotta say he wasn’t bad. It couldn’t have been easy, since Sam was made to sing in the pit, uncomfortably surrounded by pit dwellers. Now, as any past “Idol” winner who has gone on to success will tell you, playing to the home audience is the smartest thing a contestant can do. The camera is a contestant’s portal to the millions of people who can keep him or her on the show and who later might support his or her fledgling career. (Let me also point out that the people at home are those who keep “Idol” in play as a still-viable component of Fox’s weakening prime-time schedule.)

So what was Connick’s criticism of Sam’s performance? That the young man was so focused on viewers at home he wasn’t paying enough attention to the pit dwellers.

And snap! “Idol” was broken.

The show has a real problem with those pit dwellers -- and “Idol” audience members in general. They are so overly amped up they’ll scream long and loud for anybody, regardless of the quality of the performances. Also, they sway too much. (Why is that a thing? It looks ridiculous in person and even worse on camera.) As a home viewer there is no avoiding them, because they are crushed right up against the stage being their distracting selves.

Anyway, it can be said that the screaming, swaying people in the “Idol” audience are about as significant as a pimple on an elephant’s behind. That is to say they don’t really matter at all in the scheme of things, even if for years now one clueless “Idol” producer after another has felt otherwise.

But I don’t think a judge has ever complained in a critique about a contestant not diverting his or her attention away from millions of viewers at home to acknowledge a couple hundred audience members in the studio, as Connick did last night in the most glaring indication yet that “Idol” is busted. Among its many other problems, it has become too focused on the folks in the studio at the expense of those outside it.

Here is a succinct message for everyone involved: For a reality television show to be successful it must at every moment put the entertainment and engagement of the home audience first. Otherwise, there will be no show. If you don’t understand that, you shouldn’t be working on said show.

I think Connick is clearly the toughest and most insightful judge “Idol” has had since the great Simon Cowell (the only “Idol” judge ever, I might add, who knew how to engage and entertain the viewers at home). But he is also somewhat out of control of late. In last night’s show he ventured into the audience at least three times, at one point declaring over and over again, “I want to go in! I want to feel it!” That’s not his role on the show. Nor does it fall to a judge to pick up an audience member and carry her around on his shoulders, as he also did last night. (He’s old. She was very young. The moment was icky. There is no other word.) Nor should a judge take pictures of another judge during the critiques, as he did last night while Lopez was giving her comments to Jessica Meuse. At the very least it is disrespectful to the contestants.

A last note (for now) to anyone who cares: The judges really ought to stay in their seats.  No good comes from them leaving their seats, except maybe to stand up and boogie, as Paula Abdul used to do.