Episode 701: Howl -- Or, How Don Draper Has Become The Consummate Second Banana 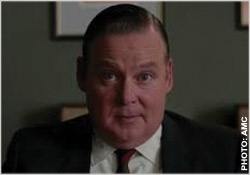 In one of the least expected openings in “Mad Men” history,  “Time Zones” begins with Freddy Rumsen addressing us directly.

Of all the gin joints in all the towns! Yes, that Freddie Rumsen, the former copywriter/ drunk who peed his pants before a client meeting and was put on “leave” from Sterling Cooper; the guy who gave Peggy her first break.

“Are you ready?” Freddy asks. “This is the beginning of everything.”

And then, we watch transfixed as Freddy talks about an Accutron watch, using words that seem to be (and are, as we discover later) pure Draperian poetry. Freddy mentions ambitious, long-haired young men, still in their “youthful colic,” wearing the watch and attracting the attention of white-haired elders.  He talks about the “fluid sweep” of the second hand, and the “electronic hum” of time being kept.

And then the monologue ends with the graceful tag line: “It’s not a timepiece. It’s a conversation piece.”

Pull back to reveal that Freddie is not speaking to a camera, nor us, but rather, pitching Peggy on some work.

“I wasn’t expecting that,” she says, as the stand-in for the blown-away audience.

And then, creative director Peggy proceeds to change the final line to “It’s time for a conversation,” to somehow make it hers. And she ruins it.

Although this was the least-watched “Mad Men” opener since 2008 (in live numbers at least) and got a mixed critical reception, probably due to not a lot of forward action, I loved it.

Filled with creator Matthew Weiner’s usual obsessions, it’s about what Mad Men is always about: reality, duality, identity, pain, and mortality. Plus lots of doors, doors that sometimes open and sometimes close, and also tend to get stuck. 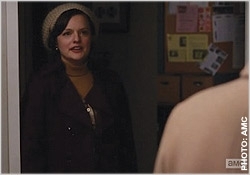 Like waiting for the proverbial Chekhovian gun to go off once it’s introduced in the first act, the fear of death has hung over the story since the opening “falling man” graphic appeared as the start of the first episode in 2007. In fact, Slate has come up with the “Don Draper Doomsday Clock,” where it’s currently 14 minutes till midnight.

And, as the title suggests, this episode was mostly focused on the “electronic hum” and “sweeping second hand” of time, and full of foreboding.

It’s January of 1969, only two months since we last saw the “gang.” But much has happened in that short period. Roles have changed, or reversed.

Ken, for example, a formerly balanced, fiction-writing account guy, has, by dint of taking on more responsibility, turned into a cartoon of a screaming, stressed-out account director. He’s still wearing the eye patch, the result of that hunting accident with the Chevy client. And, as he strains to get through the day, it seems as  though his other eyeball is about to pop.

As with many of the characters in this episode, he mentions chronologies, that “Bob in Detroit calls at noon” and “Pete in L.A. calls at 2.”  As he gets yet another phone call, he tells Joan, “ You see? I don’t even have time to take a shit!” 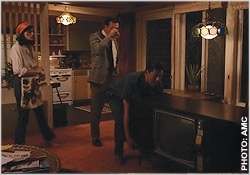 oan’s accustomed to men acting less than gallantly. For her, it’s more of the same.  She holds everything together, saving a shoe account, “although it’s just a matter of time before we lose it.” And although she’s an account person, she still operates under the radar, as she did way back when, when she was reviewing TV scripts without getting the credit, using her weekends to get a leg up.

And as they have before, Peggy and Don seem to be two sides of the same dark coin.  Lost without the work she loves, a significant other, or a grounding home life, Peggy is turning into her mother.

And former alpha man Don is toying with becoming a wife. Or perhaps a son.

In the episode’s most visually stimulating scene, Don is emerging from his plane, on a people mover,  getting picked up on the other end by Megan.   Although he tells both Megan and a woman he meets later that he has to “get back to work,” it’s only true in the existential sense, since he is in job limbo -- and also in limbo about pretty much everything in his life, including whether he will drink, smoke and/or have affairs, all of his regular go-to behaviors.

Megan shows up looking glorious, in a baby-doll micro-mini dress, driving an Austin-Healy convertible, like an impossibly glamorous Bond character. She walks toward him in slow-mo as a phenomenal musical choice plays: the Spencer Davis Group, with a teenage Stevie Winwood, singing 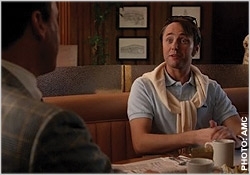 In contrast to her fabulosity, Don wears a hat with a feather and an airplane bathroom shave. He says, “I like your car,” the same line the blonde teenager Vicki uses, with her Bronx accent, on Jake LaMotta when she meets him in “Raging Bull.” And then Don gets in the passenger seat (which is stuck) as Megan handles the stick and, like a time-strapped soccer mom, tells him “Your flight was late and we’ll have a quick dinner.”

And he is emasculated throughout the visit, starting with the idea of being “bicoastal” (a word that wasn’t used in 1969.) He has no coast, and no sex. There’s the awkward dinner with Megan’s obnoxious agent, where she finds out she got a callback.  She’s drunk (a reversal of their usual couple behavior) when they get back to her house in the hills. He seems overly afraid about the coyotes howling in the canyons, and she dismisses his fears. She falls asleep in her clothes (like Don) but not without another Mommy directive, cautioning him not to throw cigarettes off the balcony, because somehow “they know” where the fires start.

But there’s no fire starting here, in this little paneled frontier house.  Throughout the show, much is made of the East Coast/West Coast divide. At the time, California did symbolize sunshine, freedom, and the possibility of a new life, while the East Coast was cold, grey, shutting down and dying.

The clip of Nixon’s inaugural speech was to me as unexpected as what came out of Freddy’s mouth. His words soared, brilliant and  poetic. What’s more, Nixon himself was a Californian, but an especially dark and dour one. The fact that his paranoia and self-sabotage caused his removal from office seems to suggest a parallel with Don.

But Don has a long history with escaping to, and being in love with, California, starting with his visits to the very first Mrs. Draper, a faux-wife/mother and the only person with whom he ever felt “himself.” 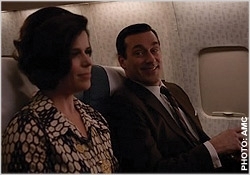 But his time at Megan’s house in the hills is horribly confining and claustrophobic. He can’t get comfortable -- on the couch or in the bed -- because it’s obviously not set up for him. When the doorbell rings (seeming to fake us out with an ominous Sharon Tate portent -- strangers at the door in a remote Hollywood Hills house), it’s only the delivery of a surprise gift from Don: a giant TV/radio/hi-fi combo. “It’s huge!” Megan complains. It’s an obvious violation of her space, as is Don and his manparts.

When she leaves for work, she wakes him up on the couch. “I wanted to catch you before you went to the office,” she says. Don had fallen asleep with an open Playboy on his chest. “Don’t tear the ads out of my magazines,” she clucks. (He’s even jealous of the coq in the dinner she prepares, asking her “any wine left, or did the chicken get it all?”)

The flight home presents Don with his dark haired Ur-mistress type, played by Neve Campbell, who talks about the death of her husband, who "was too thirsty and died of thirst" before his 50th birthday. His ashes are spread on Tom Sawyer Island in Disneyland. (Tom had to watch his own funeral, if you recall.) And this alluring female stranger and Don seem to have an easier time talking, and are more comfortable sleeping together in the confined space of a plane, than Don and Megan are in her bed. But in the end, he turns Ms. Neve  down. Why? Maybe because she’s too available, maybe because talk of the thirsty guy put the fear of death in him. 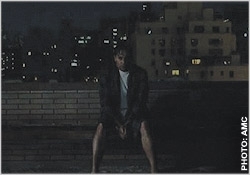 The final chronology is laid out by Freddy, who reappears, thrillingly, at the end, to close the loop on the identity of the copywriter.  Freddy tells Don that he’s got to stop the “Cyrano” act, and get them both jobs. Freddy, himself a cautionary tale, although now a successful member of AA, doesn’t want Don to end up as “damaged goods.” And he lists all that Don has missed at Sterling Cooper: “Christmas, the Super Bowl, pretty soon it will be Easter" (the resurrection).

This time, however, Don seems to be resisting rebirth. A ticking time bomb of an episode, it ends bleakly, but with the inspired use of Vanilla Fudge’s haunting, psychedelic cover of “You Keep Me Hanging On”: Don, out in the cold, on his own balcony, where the East Coast coyotes, in the form of ambulance sirens, howl ominously. He’s sitting hunched, almost in a duck and cover position. He knows that he “ruins everything,” as he told his seatmate. He’s not sure whether he has “broken the vessel.”

The camera pulls back, to show his fake apartment where he has been a fake husband, to end the first episode in this first part of a false extension of a season. Meanwhile, Roger is in carnal hell, Pete loves bagels and California, and Ted is suffering and beige.

Now, more than ever, it’s time for a conversation!