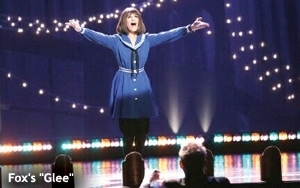 It's been a while since I've paid attention to Fox's “Glee.” I checked out the episode that paid tribute to the late Cory Monteith earlier this season, but before that I can’t remember. The show's ratings slide suggests that I am not the only former fan who has drifted off in recent seasons -- or perhaps been pushed away by bad storytelling, as the harshest critics of “Glee” might suggest.

The exodus is not hard to understand; the show bears little resemblance to the spirited and charming treat it was during its first two seasons. The most interesting characters are no longer in high school, and many of them are fulfilling fast-track fantasies in New York City. It has become virtually impossible to relate to most of them on any level. The premature fall of a once special show -- one that held the promise of advancing broadcast television, at least in the eyes of young people -- has been painful to see.

Still, I couldn't help but check in Tuesday night to see Rachel Berry's big Broadway debut in “Funny Girl” in the episode aptly titled “Opening Night.” It took even more suspension of disbelief than this show usually demands just to accept the idea that a young woman who has only been out of high school for two years (if that long) would land the starring role in a major Broadway production. An instant accomplishment that enormous is not very realistic, but it's very “Glee.”

I have to admit, the musical sequences that put the spotlight squarely on Rachel, belting out songs from that classic musical while fulfilling her lifelong dream of starring on Broadway as Fanny Brice, took me back to the early years of the show. “Glee” at its best could stir one's feelings like some of the best dramas on television. “Opening Night” in its best moments did exactly that.

Adding to the emotional resonance of it all were several little reminders of the late Cory Monteith's musically talented jock Finn Hudson, the love of Rachel's young life. Rachel saved a seat for him on opening night and remembered him as tears rolled down her cheeks during her heartbreaking performance of “Who Are You Now.” Later, Mr. Schue called from back home to tell his former students who are now all assembled in Manhattan that he and Emma were the proud parents of a little boy whose middle name is Finn.

Lea Michele was simply spectacular in this episode as the tremulous and triumphant Rachel. It was surely the high point of this season of “Glee,” but I couldn’t help but think that if the show a while back had not degenerated into such a frustrating if admittedly fascinating mess then “Opening Night” might have been one of the highlights of the television season overall.

But, perhaps as usual, this hour of “Glee” was ultimately as exasperating and off-putting as it was entertaining and spirit-lifting. Much of the blame, as always, can be placed on the Sue Sylvester character, once a comic delight, but in recent years just an annoying and at times revolting nut-case. Sue happened to be in New York and attended the opening night of “Funny Girl,” only to let her long-running neurosis about Rachel compel her to walk out during the first act. In the lobby she met another walk-out – a man named Mario who owned several restaurants, and after hearing that Sue is the daughter of Nazi hunters and was briefly married to herself, offered to cook her dinner. (Chris Parnell, who played Mario, had the best line of the show, explaining to Sue why he walked out of “Funny Girl”: “If I wanted to see a show about an ugly duckling who gets dumped I’ll watch an episode of ‘Girls'.")

Later, Sue and Mario retreated to Rachel's apartment for a night of sex. (Is that really where they would go? Mario lives in the city, for goodness sakes.) Later, Sue tells Rachel and the rest of the gang that they had sex all over the apartment. “I would put something down on that couch before I sat on it,” she advised. Like I said, she is sometimes revolting ... and not at all funny anymore.

Other complaints: “Funny Girl,” or what we saw of it, looked to have been shot on a budget of about fifty dollars. Rachel's dads were not there for her Broadway debut; neither was her mother. Since when do parents (especially parents with the cash to travel at whim) miss their child's opening night anywhere, let alone on Broadway?

Most unbelievably, Rachel -- in yet another display of her signature self-centeredness -- opted not to attend the show's opening night dinner with the producers, cast-mates and crew members who made the realization of her dream possible, choosing instead to party at a West Village gay club with her pals.

The critic for The New York Times gave Rachel an unqualified rave review in the next day's edition, which Rachel and friends waited until dawn to see. I thought the Times was available much earlier than that, at least in midtown, and that theater producers and publicists – and the stars of new shows -- waited with breathless anticipation to be the first to see a review.

In many ways “Opening Night” felt like a fitting close for the show. But there are more episodes to go this season, and an entire season (at a reported 24 episodes) to come that will somehow wrap it all up. That will be quite a stretch, because played-out “Glee” already seems to have wrapped itself up. A creative turnaround next season isn't to be expected, but after enjoying the better moments in this week's episode I would be happy to see that happen.