NBC's 2014-15 Season: Rom-Coms, Conspiracies And The Return Of Must-See Thursdays 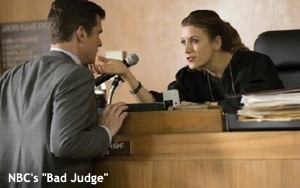 It's easy to be overwhelmed by the avalanche of new series the broadcast networks are announcing this week -- especially when factoring in all of the mid- and late-season shows included in their upfront presentations. More often than not, the midseason shows look more intriguing than the series that will have their premieres in the fall.

This is a lot of new information for anyone in the advertising industry or the press to process in the space of four days (or less) and without benefit of full pilots. The situation would seem not to do any of the new shows much good, what with all of the rushes to judgment and early picks and pans everyone is prompted to make all at once. Remember, most of the fall and midseason shows each network breathlessly promoted last year at this time died along the way or were officially axed during the last week or so.

For NBC, the first broadcaster to present its 2014-15 schedule, the casualty list includes one of the most promising new shows of 2013-14, and one of the most praised at this time last year by critics and advertisers alike: “The Michael J. Fox Show.” It had a greatly entertaining pilot, but every episode thereafter was a disappointment. There was also much excitement last spring about “Dracula,” and we saw how that went. The other NBC freshman duds were “Welcome to the Family” (another show with a strong pilot but no follow-through), “Sean Saves the World” (inexplicable right from the start), “Ironside” (ditto), “Crisis,” “Believe” and “Growing Up Fisher.”

No new shows that NBC previewed at its event on Monday excited the crowd as much as the news of a significant bit of smart scheduling that will maximize the outsize appeal of the only new smash hit of 2013-14 on NBC or any broadcast network, “The Blacklist.” It will return to its Monday night time period in the fall, take a break after the November sweeps, then return with a two-part story that will begin in a special episode scheduled after NBC’s presentation of Super Bowl XLIX on February 1 and conclude four nights later when it settles into its new time period, Thursday at 9 p.m.

This is the boldest effort made by NBC in many years to reclaim its long-time and long-lost identity as the home of Must-See Thursday night TV. Interestingly, NBC’s most buzzed-about show will be going up against ABC’s most buzzed-about effort, “Scandal,” which will move forward to the 9 p.m. hour come the new season.

The drama that will at midseason move into the Monday time period currently occupied by “The Blacklist” is “State of Affairs,” one of several new series NBC announced this week that are about CIA operatives, spies, domestic and/or global conspiracies and/or cover-ups, most with strong female leads (in this case Katherine Heigl) and all looking like broadcast’s answer to the heavy drama of Showtime’s “Homeland” and the award-magnet performance of its star, Claire Danes. At first blush none of them appear to have the pure entertainment value or sex appeal of USA Network’s “Covert Affairs.”

Elsewhere, NBC is trying a drama that on the surface looks like a throwback to the gentler and more lighthearted detective fare of the Seventies and Eighties in “The Mysteries of Laura,” about a female homicide detective (played by Debra Messing) balancing the demands of her career with those of being a single mother in Manhattan. There should be a place on broadcast television for a detective show that isn’t unrelentingly grim and grisly, and this one could be it. Unfortunately this seemed to be the NBC show that most people were saying unfortunate things about as they exited the network’s event, so it likely has its work cut out for it.

Meanwhile, NBC previewed two new romantic comedies titled “Marry Me” and “A to Z” that looked instantly regrettable and forgettable. Both appear to revolve around characters that in no way resemble people one might encounter in real life. That means a number of desperate to be hip critics and bloggers will likely fawn all over them even as the rest of the available television audience looks elsewhere for its entertainment.

I was more interested in “Bad Judge,” an apparently unapologetic and raucous comedy that should showcase the talents of Kate Walsh (currently one of the many best things about the FX mini-series “Fargo”), and “The Unbreakable Kimmy Schmidt,” a bizarre new effort about a woman re-entering life after 15 years in a cult from Tina Fey. Both look silly, to be sure, but at least these shows aren’t afraid to identify themselves as uninhibited and unreal in all the best ways.

And then there’s “Constantine,” a supernatural thriller about a demon-hunter based on the long-running DC Comics title “Hellblazer.” The preview looked tantalizing in its own right, but this is one of at least ten new broadcast series next season that can be classified as “genre” shows, meaning they will make a splash at the San Diego Comic-Con in July but aren’t necessary going to attract a significant audience when they are telecast (like, for example, such recent duds as The CW’s “Tomorrow People” and the aforementioned “Dracula”). Added to the ten or more genre shows that will be returning to the broadcasters’ schedules next season, there is a definite threat of overkill in the air.