The 2014-15 TV Season: Deadly Conspiracies, Kids In Peril And Annoying Couples In Love 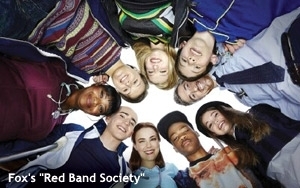 Yesterday I wrote about the broadcast television trend that will be the most talked about of the 2014-15 season the glut of new and returning genre shows (a category that encompasses series about superheroes, supernatural beings, hunters of supernatural beings, science fiction and fantasy characters), brought about no doubt by the ever-increasing Comic-Con Effect.

But there are other dominant themes that will also reaffirm the idea that writers, producers and network and studio executives are a Borg subset, busily buzzing in a hive of their own. (Whenever I write on this subject I am reminded about a period in the early Nineties when each of the Big Three networks developed a prime-time series featuring a talking dog. NBC had “Poochinski.” ABC had “Dad’s a Dog.” CBS’ entry was the execrable “Tequila and Bonetti.” If memory serves, only the latter made it on air, and it didn't last for long.)

Again, I feel it is only fair to note up front that it is entirely too early to make any judgments about any of the new series currently set for next season. Many of them will be rewritten, re-cast and/or entirely re-shot between now and the time of their premieres, so even the first wave of pilots -- and the recently announced network schedules -- must be looked upon as works in progress.

That said, it is almost impossible not to offer a few snap responses to certain of the shows announced last week. I haven’t been able to disguise my immediate disdain for the seemingly insipid new rom-coms set to run on ABC (“Selfie” and “Manhattan Love Story”) and NBC (“Marry Me” and “A to Z”), which collectively represent what I hope will be a mercifully limited trend. I’m certain that a number of writers and critics at a handful of consumer magazines will tumble all over themselves in their boundless support for at least some of those shows. I’m also certain that, like many recent sitcoms on NBC and ABC, more people will visit my local Westfield Shopping Mall this holiday weekend than will likely watch any of them.

Okay, that’s an exaggeration -- but not much of one. Is anybody up for a marathon of “Mixology”? I didn’t think so.

Another limited trend can be summed up thusly: It is going to be a bad season for kids. Fox is offering as its return to the youth-ensemble prime-time serial -- a format that once brought it enormous success -- a curious drama titled “Red Band Society” that revolves around kids and teens with serious health issues who are living in a hospital in Los Angeles. The clips Fox made available last week suggest that this will be a high quality production -- boosted immeasurably, I presume, by a starring role for Octavia Spencer -- but that doesn’t change the facts. This is a show about kids who are sick or dying. In fact, it’s narrated by a boy in a coma. Good times? We’ll see.

Fox is also offering “Gracepoint,” an adaptation of the riveting BBC drama “Broadchurch,” the first season of which ran on BBC America last summer. It’s the story of residents in a small town whose lives are upended after the very suspicious death of a little boy. (A promising note: The producers of “Gracepoint” convinced David Tennant, the star of “Broadchurch,” to basically recreate the role for their production … and his co-star here is Anna Gunn.)

Meanwhile, ABC is getting in on this particular action with “Secrets and Lies,” which will be the first television series for Ryan Phillippe since his unforgettable turn as a gay teenager (the first ever seen in an American soap opera) on “One Life to Live.” He plays a family man whose life is ripped apart after he discovers the body of his neighbor’s young son in the nearby woods.

ABC also has on deck “The Whispers,” a thriller in which aliens have taken control of the world’s children. It sounds like it owes a debt to the BBC miniseries “Torchwood: Children of Earth.”

And then there is the most interesting TV trend of all: Series in which characters become caught up in local, federal or international conspiracies of different kinds. Strangely, they’re all coming up on NBC. We have “Allegiance,” about an idealistic young CIA agent who learns a shocking secret about his parents; “Odyssey,” about three strangers drawn into an international conspiracy that involves a major US corporation funding terrorism, and “State of Affairs,” about a CIA analyst (Katherine Heigl) determined to solve the mysteries surrounding a terrorist attack that took the life of her fiancé.

These series, along with Fox’s recently returned “24,” ABC’s “Scandal” and such cable efforts as Showtime’s “Homeland” and FX’s “The Americans,” seem to continually reinforce the idea that one government or another is out to get us. Don’t look for superheroes from any of the genre shows to save the day. Maybe the lead character in CBS’ promising “Madam Secretary” can help us.