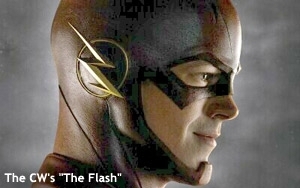 The excitement of Upfront Week is dying down, leaving us in that window between watching a deluge of clips from upcoming series on the broadcast networks and carefully viewing the actual pilots. So it is entirely too early to make any judgments about any of the new series currently set for next season. Remember -- many of them will be rewritten, re-cast and/or entirely re-shot between now and the time of their premieres, so even the first wave of pilots must be looked upon as works in progress.

The most interesting story about the fall season to come is the incredible amount of superhero, fantasy and genre shows on the broadcast networks, including NBC’s “Constantine,” “Emerald City” and “Heroes Reborn”; ABC’s “Marvel’s Agent Carter,” “The Whispers” and “Forever”; Fox’s “Gotham” (a superhero show without superheroes, as Andy Samberg noted during his very funny routine at Fox’s upfront presentation) and The CW’s “The Flash,” “iZombie” and “The Messengers” -- not to mention the returning “Marvel’s Agents of S.H.I.E.L.D.”, “Resurrection” and “Once Upon a Time” on ABC; “Sleepy Hollow” on Fox; and “The Vampire Diaries,” “The Originals,” “Arrow,” “The 100” and “Supernatural” on The CW. (Consider also the many science fiction and genre shows on Syfy, TNT, BBC America and elsewhere -- and the field grows ever more competitive.)

There is no way to tell which of the new shows will be hot and which will not, although from what I saw last week the two easy picks right now would be The CW's “The Flash” and Fox’s “Gotham.” But who can really tell? A tantalizing sizzle reel is a far cry from a second and third episode.

Of greater interest is the reason behind this sudden surge in genre shows. Sure, they resonate with the young audience at The CW, but most -- if not all -- of those CW shows wouldn’t survive a season on one of the Big Three. (At this point, “Arrow” or “The Vampire Diaries” might be beneficial to Fox, given its current ratings woes.) What we are seeing here is something I would call the Comic-Con Effect. Having attended the San Diego Con for six consecutive years, I can tell you from firsthand experience that there is nothing quite like the wonderment in the eyes of network and studio executives seated in one of the dozens of cavernous halls at the San Diego Convention Center during panel presentations for their shows. They often look like children on Christmas morning eagerly anticipating the opening of gifts and the happy day to come. By the end of most panels, as hundreds or thousands of nerds and geeks (and I use those terms fondly) are expressing their approval through cheers, tears and thunderous applause, those executives are floating on air. (I imagine this happens with movie studio executives as well.) Talking with any of them at any of the many parties that fill the nights at the Con makes clear that they are always convinced they have a fresh batch of winners.

Nothing could be further from the truth. For every well-received movie or show at Comic-Con there are at least two or three that fail either in their first season or their second. (Similarly, an awful lot of the movies previewed there expire on opening weekend, stained by the dreaded green splat on rottentomatoes.)

I completely understand why network and studio executives respond the way they do. Comic-Con is a harmonious experience; there is quite literally no happier place on earth than the Gaslamp Quarter of San Diego during the four days of July when its streets are teaming with tens of thousands of fan-boys and girls getting their geek on. I have to imagine that every network and studio executive -- not to mention most producers, writers and actors -- want a piece of that at one time or another. Who wouldn’t want a compelling reason to attend an event like that and be at the center of so massive an outpouring of love and affection? Even show business executives with the coldest of hearts have been known to project a certain uncharacteristic warmth in that environment.

I have tried over the years to suggest to a number of them that a grand reception at Comic-Con is a guarantee of absolutely nothing. I only know this because I have attended so many panels over a number of years and have had no stake in the outcome of any of them. I have never heard of a show being flat-out rejected there. But we all know that many shows (and even more movies) that have had the full support of the Con crowd have flopped when exposed to the public at large.

Anyway, I have to believe that this is why genre shows look to be the dominant trend of 2014-15 -- that and their Future Viewing Potential. Plainly, they can’t all thrive or survive when so many of them are scheduled in such close proximity. Along those lines, I think CBS is very smart to keep its genre shows out of the “traditional” season competition and to use them instead as smart summer programming. I predict strong ratings in July and August for the second season of “Under the Dome” and the first season of “Extant.” I’m not so sure they would perform as well in the fall or winter when there are so many other genre shows from which to choose.