A Fond Farewell To Ann B. Davis Of 'The Brady Bunch' 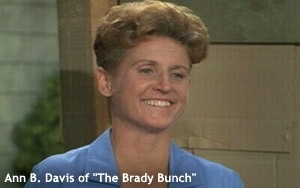 The passing yesterday of beloved “Brady Bunch” star Ann B. Davis brings all sorts of memories to mind for people lucky enough to have grown up during the Television Generation.

As happens when I hear of the death of anyone who starred in any of the series that comprised the still unequaled CBS Saturday night lineup of 1973-74 (including Ted Knight of “The Mary Tyler Moore Show,” Carroll O’Connor and Jean Stapleton of “All in the Family,” Suzanne Pleshette of “The Bob Newhart Show” and Harvey Korman of “The Carol Burnett Show”), I immediately felt a sense of personal loss when I learned that Davis had passed. That’s because “The Brady Bunch” (and its cast) was a key component in the prime-time lineup I consider to have been the second-most memorable in television history: The 1971-72 and 1972-73 Friday night lineup on ABC, which consisted of “The Brady Bunch,” “The Partridge Family,” “Room 222,” “The Odd Couple” and “Love American Style.”

Certainly, the critical reception to most of those shows didn’t come close to the praise that every series on that CBS lineup received, and with the exceptions of “Room 222” and “The Odd Couple” those ABC shows were largely ignored by the Emmys and other awards (while most of the CBS shows collected them by the handful). But for kids at the time -- many years before the launch of the TGIF franchise on the Alphabet Net in the late-Eighties and early-Nineties -- the ABC shows were the bee’s knees.

Four of those ABC shows are shown with some regularity on such nostalgia channels as Me-TV and Antenna TV. (Mysteriously and unfortunately, “Room 222” seems to have drifted off into the ether.) But in my experience the most visible of the group and to this day, the most beloved, has been and continues to be “The Brady Bunch,” which ran from 1969-74. After having it in my life for more than 40 years it is almost impossible not to feel some sense of loss when one of its stars passes.

The first blow came with the death of Robert Reed in 1992. And now we have lost Ann B. Davis -- the woman who brought to life Alice Nelson, one of a few beloved housekeepers who have entertained millions of viewers for dozens of years (including Shirley Booth as the title character on “Hazel,” Esther Role as Florida Evans on “Maude” and Marla Gibbs as Florence on “The Jeffersons”). All of those wonderful women created memorable characters, but there was something about Davis and her portrayal of Alice that made a massive impact on popular culture.

Maybe it was the fact that Alice often seemed to be the person who was really in charge of the bustling Brady home. Maybe she had certain no-nonsense qualities that every kid looks for in the adults in his or her life, including his or her parents. Or maybe it was because she was a Friday night friend to the millions of kids, teens and families who felt in the early Seventies that ABC was the place to be at the start of the weekend.

At the very least, Davis was an integral player in a franchise that with time has proven to be almost as formidable as any other -- something that still strikes me as surprising, given the essential simplicity of “The Brady Bunch” and the fact that at the time of its first run, although it had millions of fans there was nothing about it that would suggest that it had the makings of a timeless classic.

But it has been with us in one way or another since then. “The Brady Bunch” is the only prime-time broadcast series to be continued and/or revived in one form or another on each of the Big Three networks. After it was canceled by ABC, it continued on the network in a bizarre new format, “The Brady Bunch Variety Hour,” in which the characters became a popular singing act not unlike “The Partridge Family.” (Davis was in on that action too.) ABC also continued the franchise with an animated “Brady Bunch” series on Saturday mornings, which featured all six Brady kids (with the original cast members providing their voices) but no adults (leaving Alice among the absent).

Then it was off to NBC, which in 1981 developed a reunion movie titled “The Brady Girls Get Married” (in which it was revealed that Alice had married Sam the butcher!). Apparently it never ran as an actual television movie. Instead, NBC cut it into three half-hour episodes that were used to introduce a new series known as “The Brady Brides.” The entire “Brady” cast (including Davis) appeared in the three episodes that originally comprised the movie, but only Maureen McCormick and Eve Plumb were featured in the ten episodes of “The Brady Brides” that followed.

Seven years later, in December 1988, CBS ran a reunion movie titled “A Very Brady Christmas” (in which it was revealed that Sam had cheated on Alice!) that turned out to be the second-highest-rated TV movie of the 1988-89 season. Because “Brady Christmas” had dramatic elements in its story that seemed to resonate with viewers, CBS ordered up “The Bradys,” an hour-long drama series that tackled weighty issues such as alcoholism (Marcia! Marcia! Marcia!). It featured most of the original cast (including Davis).

The franchise continued anew with two theatrical “Brady Bunch” movies in 1995 and 1996 and a made-for-television movie that ran on Fox in 2002. But the original cast had moved on – mostly to appearances in reality programs.

Davis is also remembered for her portrayal of “Schultzy” on the 1955-59 sitcom “The Bob Cummings Show” (for which she won two Emmys as Outstanding Supporting Actress in a Comedy Series). She made a cameo appearance in the 1995 “Brady Bunch” movie as a truck driver who went by that name.

broadcast networks, tv
1 comment about "A Fond Farewell To Ann B. Davis Of 'The Brady Bunch'".
Check to receive email when comments are posted.
Next story loading