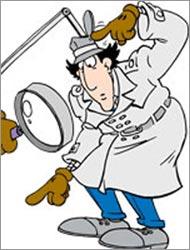 Remember the Pentagon scandals of the 1970s and 80s, when pre-Tea Party federal budget blasters carted out examples of hundred-dollar wing nuts (the real kind) and thousand-dollar toilet seats? Recall the tales of stultifying and stupid research grants? Well I wonder who is going to start blowing the whistle on the high cost of sarcasm detectors. Yes, it has come to that. According to the NextGov.com government news site, the Secret Service put out a work order earlier this week explaining that it was in the market for software designed to detect emotion in past Twitter postings. Chief among the “sentiment analysis” targets required by the new software -- “ability to detect sarcasm.”

They don’t need software to detect my sarcasm. I will flag it for them.

We know that Secret Service agents are paid to be deadpan and seemingly humorless...but really.

Okay, okay, we know the Secret Service has a legitimate role to detect threats to our leading political figures. I imagine it is quite important for them to distinguish between a genuinely dangerous expression of rage toward a public figure and a deadpan piece of wit that lacked a telling emoticon. But do we really want an algorithm doing this? The RFP states that the mission of the software is “automate the social media monitoring process,” to make the Big Data analysis of trends and patterns digestible and actionable by a range of staff.

The specific requirements include sentiment analysis, customizable keyword search, audience segmentation, and more. And the sarcasm feature is described as the “Ability to detect sarcasm and false positives.”

By the way, it is not just what people say but how much social power they have. One of the needs is “infleuncer identification.”

As NextGov recounts, the federal government has gotten into trouble in the past over the ways it uses data gleaned from social channels. Oversight committees questioned the Homeland Security Committee’s use of these public channels for gathering information on people exercising their Constitutional right (nay obligation) to be publicly critical of their government’s activities when they saw fit.

However one feels about the reach/over-reach of programs designed to detect security threats, it is notable how brazen all of this is. In the 60s it was scandalous, but hardly surprising, that domestic law enforcement was actively chronicling and profiling civil rights and anti-war protest groups. Forty-five years later, the government is issuing RFPs for software designed to do at least part of that same job.