Restoration Hardware's Catalog Mailing Jumps the Shark -- And So Much More

In the annals of corporate credibility, few initiatives stretch reality quite so much as the Restoration Hardware “Source” books, which arrived here at the house last week. I’d heard about these massive catalogs being delivered all over town for a month or so, and when I got mine, I realized it was probably the reason the cement was missing between the bricks that make up our front steps. I wouldn’t want to drop the thing on my foot; let’s put it that way. 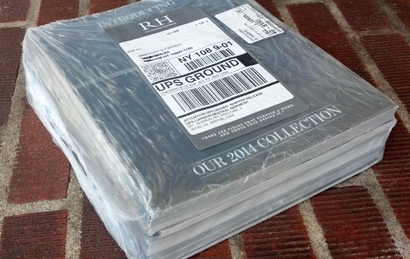 Our stack of 13 entirely unsolicited catalogs is 3.5 inches high and, according to the shipping label, weighs in at 12 lbs. Other reports I’ve seen online claim that many people received stacks that weighed 17 lbs. While feeling a little cheated -- is it something to do with our house’s meager square footage? -- I’m also happy that perhaps my stack won’t use the earth’s resources quite so much as those people deemed worthy of the heftier catalog bundles. When something is so obviously wrong, you look for all the positive you can.

And we haven’t even gotten to the best part yet -- the part where Restoration Hardware has done such a stellar job of bending the curve on credibility that it’s time to retire the phrase “jump the shark,” and replace it with something new just to honor what the company has achieved here. On the mailing label, it says in all caps: “UPS CARBON NEUTRAL FOOTPRINT.” Then, those puzzled recipients who manage to saw through the shrink-wrap, will see a letter on the top, and it’s about Restoration Hardware’s … teehee … Sustainability Initiatives! LOLOLOLOLOL! That’s a good one!

(I’ll continue when you’ve stopped laughing, which I realize may mean you have to take the weekend off from finishing reading this column.)

To continue, the letter talks about how the company now only does one mailing per year, uses forest-certified paper, and engages in the aforementioned carbon neutral shipping, and includes the specious equation, “HEAVIER LOAD = LIGHTER (CARBON) FOOTPRINT.” Run that by me again?

To say the optics are all wrong is to state the (metaphor watch!) blindingly obvious. What Restoration Hardware can’t possibly have realized in mailing out millions of these is that this whole initiative looks so bad the facts don’t matter. Even if the company and its employees have indeed become, “more responsible stewards of the planet,” as the letter claims, no one in their right mind can have 12 unrequested pounds of paper land on their doorstep and believe it was somehow OK for the environment.  No. One.

From a corporate reputation standpoint, it also barely matters that some people are disputing the actual sustainability claims. Sometimes the facts have little to do with credibility, and this is one of those cases.

As for the company, what has it said about all this? Not a whole hell of a lot. According to this story in Bloomberg Businessweek, the CEO said on an analysts’ call earlier this month: “I don’t know of another catalog retailer of scale taking the steps we are to minimize our impact on the environment.” That has to be mean that he doesn’t know a lot of other catalog retailers.

To the surprise of no one, social media is abuzz, and it isn’t a pretty sound. If you want to have some fun, take a spin through the #restorationhardware hashtag on Twitter, where you’ll encounter not only a photo gallery of pictures from recipients whose sole purpose is to convey the mailing’s ridiculous girth, but a tweetstream featuring  all sorts of drollery about how the catalogs make an excellent doorstop/step stool/dish holder for aging pets.

While this is to be entirely expected, you also have to wonder if this mass mailing -- which brings new meaning to the term “mass mailing” -- would have been brought to light without social media. If this thing had shown up on my door in a world without Facebook and Twitter, the scale of the mailing may never have occurred to me. I mean what company would deliver a 12-lb. stack of catalogs to millions of people?