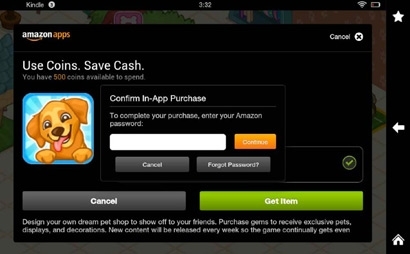 Amazon unfairly allowed young children to rack up charges on their parents' credit cards by making in-app purchases, the Federal Trade Commission alleges in a lawsuit filed on Thursday.

“Parents and other Amazon account holders have suffered significant monetary injury, with thousands of consumers complaining about unauthorized in-app charges by their children, and many consumers reporting up to hundreds of dollars in such charges,” the FTC alleges in its complaint, filed in U.S. District Court in the Western District of Washington.

The FTC is seeking a court order requiring Amazon to reimburse parents for charges their children incurred within apps. Earlier this year, Apple agreed to provide refunds of at least $32.5 million to settle similar allegations.

The agency alleges in its complaint that Amazon began receiving complaints from parents about in-app charges nearly as soon as Amazon began allowing them. An Appstore manager allegedly said the company was “clearly causing problems for a large percentage of our customers.”

The FTC says many parents said that their children didn't realize they were incurring charges by making in-app purchases -- which often occurred when they were playing games on a Kindle. “One Appstore reviewer complaining about over $80 in unauthorized charges in Tap Zoo commented that her eight-year-old daughter thought she was purchasing the in-game coin packs with virtual currency, not real money,” the FTC alleges. “A consumer whose child incurred unauthorized in-app charges in Ice Age Village explained that her daughter 'thought she was paying with acorns.'”

Amazon retains 30% of revenue from in-app purchases, the FTC says.

The agency says that Amazon changed its policies last month, and now gets people's “informed consent” for in-app purchases made on new mobile devices.

The FTC also says that parents faced “hurdles” in obtaining refunds. “Amazon’s stated policy is that all in-app charges are final,” the FTC alleges. “To the extent consumers have sought an exception to that stated policy, Amazon’s process is unclear and confusing, involving emails and web pages that do not explain how to seek a refund for in-app charges, or that suggest that consumers cannot obtain a refund for such charges.”

The Direct Marketing Association criticized news of the FTC's lawsuit. "The FTC should be encouraging innovation in the growing mobile industry, which benefits consumers and competition," Peggy Hudson, DMA senior vice president of government affairs, said in a statement. "Instead, the Commission seems focused on using novel legal theories and scarce enforcement resources to go after America's leading tech companies in court.”

But the advocacy group Center for Digital Democracy cheered the FTC's move. "Amazon’s policies of making it simple for children to accidentally spend hundreds of dollars in a 'kids' app ... are irresponsible and unfair,” the group said in a statement