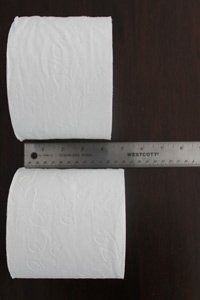 I’m generally not the most perceptive cat out there. I go weeks without noticing the new throw rug in the den, for instance, or the huge flashing ROAD CLOSED sign on a convenient neighborhood artery. But this morning, upon completing an important piece of personal business, I sensed that something was a little off.

Further investigation revealed that I was not imagining things. Take a look at the picture above: One unspooled roll is clearly about three-quarters of an inch wider than the other, even though they were plucked from two identically packaged 12-roll bundles. That’s stealth product tampering in my book. Did you peg the adorable, kindly Charmin Bears as nefarious propagators of untruths? Neither did I, friend, neither did I. Anyway, if you need something to be angry about today, Internet, let it be this - unless, of course, something legitimately objectionable happens, like the Supreme Court continuing down its recent path and classifying women as chattel.

Since I can’t shake my sense of violation, I thought it’d be wise to choose a noncontroversial subject for today’s exercise: Walmart. Nobody has a problem with Walmart, not labor activists or margin-pinched suppliers or candidates/organizations on the sad side of its PAC largesse, right? Walmart is good and decent and modest, and the bestest friend any family farmer will ever have, in this life or the next.

That’s the central premise of a trio of brand videos the retail giant dropped this week, the second batch in a series of “Growers’ Stories” designed to tout both its produce bona fides and its warm relationships with the farmers whose goods occupy its shelves. They’re every bit as sleekly produced and self-celebratory as the concept would suggest and, as such, end up painting Walmart as every bit the out-of-touch behemoth its detractors claim it to be.

Part of the problem is that the three clips are carbon copies of one another. They emphasize family bonds - I’ll see your third-generation farm and raise you a fourth - and linger on from-behind shots of dads and sons holding hands while leisurely strolling through the fields. They employ special magical filters to make the sun shine more brilliantly and the food pop off the screen (the peaches clip rolls out what has to be the most symmetrical peach in the history of fruit). The protagonist of each is a middle-aged white dude in a collared shirt.

Even more egregiously, the farmers break with the explanations about harvesting processes (and their effect on ripeness and whatnot) at approximately the 40-second mark. They then spend the rest of their allotted time rhapsodizing about their relationships with Walmart, during which they dole out corporate-stamped diction like “dream come true” and “rewarding experience.”

I don’t doubt their sincerity; the farmers have likely been enriched financially since they found themselves on the receiving end of a wave of Walmart’s magic retail wand. But the clips, and thus Walmart, would have been better served by the farmers spelling it out more openly. “Thanks to Walmart, we can afford to add employees and reinvest in equipment. Our produce and our lives are better for the association, and we’re not the only ones” etc. Isn’t Walmart supposed to be on some kind of company-of-the-people transparency kick nowadays?

Really, the only thing I learned here - about Walmart, its support of family farms or family farming - is that there exists an alternate pronunciation of “apricot.” In the video about the pluot (a pluot is the cross-pollinated demon spawn of a plum and an apricot), the nice-guy farmer protagonist says it like “AY-pricot,” rather than the traditional “AAAA-pricot.” Have I been pronouncing this incorrectly my entire life? If so, that provides me with more food for thought - pun massively, unapologetically intended - than anything in the “Growers’ Stories” canon. This is brand pabulum at its laziest and least self-aware.

online video, video
3 comments about "Walmart Comes Across As Out Of Touch In Latest 'Growers' Stories' Videos".
Check to receive email when comments are posted.
Read more comments >
Next story loading