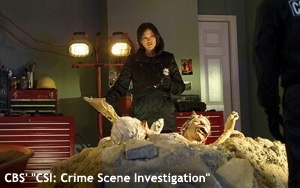 I wonder if procedural crime dramas are going to fall out of favor, not because of audience fatigue (though that wouldn’t be surprising; how much murder and mayhem can any one person take?), but due to the fact that episodes of such shows are largely stand-alone or self-contained?

Crime dramas such as those in the “Law & Order” and “CSI” franchises were all the rage in the Nineties and the last decade not only because they drew large audiences in first run (as quality crime and detective dramas still do) but because they were golden in the syndication market. Traditional syndication is still a factor in the life and value of any series, but the television business now is suddenly all about the digital stream appeal rather than the standard syndie sale.

To put it another way, shows with giant FPV (Future Viewing Potential) are the new prom kings and queens of the television business (as detailed here). Even if they don’t sit at the very top of the ratings during their first and second runs, or DVR playback and VOD, they are finding new levels of longevity and back-end profitability that could not have been imagined just a few years ago thanks to Netflix, Hulu, Amazon and other streaming services. (One can only wonder how many more such platforms are going to come along even before this decade is over.)

Sometimes this leads to eye-rolling success for low-rated shows that seemed utterly played out in their broadcast runs – like the NBC sitcom “Community,” for example, which has found extended life on Yahoo Screen. (Rumor has it that “Enlisted” -- a younger, fresher and infinitely funnier comedy that was unceremoniously mistreated during its very short life on Fox is under consideration by Yahoo as a possible companion series for “Community.” I have no first-hand knowledge of this. But the fan base for “Enlisted” is just as fervent as that for “Community,” and if all or most of the cast is available then the saving and further nurturing of this show would be an even smarter play for Yahoo. (“Community” and “Enlisted,” I might add, could both be even funnier shows free of broadcast television standards and practices and general interference.)

A key element in the FPV appeal of shows as in the streaming universe is continuity in their storytelling. An extended, twisting and turning mythology – something that the broadcast networks have been marginalizing or altogether avoiding in most of their series for at least 15 years – now makes a show even more desirable in the long term. The thinking here is that ongoing stories more readily entice viewers who watch on streaming services, especially those given to binge watching, in ways that series built in the standard stand-alone format may not.

This is especially true of younger viewers who have come of age in the digital, multi-platform, stream-it-anytime era. They’ll turn anything into a binge, treating even sitcoms as hundred-hour-long movies, especially those shows that they may not have watched or to which they came late during their runs. Of course, many of the most durable sitcoms, from “I Love Lucy” to “Bewitched” to “All in the Family” to “Friends,” have a serialized component to their storytelling, simply because they were on for so many years and chronicled changes in the lives of their characters (courtships, marriages, births, new jobs, etc.) throughout their runs.

There is still plenty of room out there for shows that are more stand-alone in nature – such as “The Big Bang Theory,” a huge hit for TBS, and “Law & Order,” currently a staple on Sundance. They’re like flypaper, as television executives used to say, to those who mindlessly click around seeking something to watch, or those who want to watch television the old fashioned way, without making a specific commitment. Of course, watching such shows on cable networks generally means suffering through countless commercials and heavy edits to the original cuts of the shows (to accommodate those countless commercials). If the same show can be enjoyed commercial-free on another platform, that would seem to be the logical alternative. That’s certainly the way young people think. (This is something that the commercial rich Hulu should keep in mind.)

It is telling that, as many network executives and series show-runners begin promoting their new fall programs (at the current Television Critics Association tour and elsewhere) they are all too eager to stress the serialized aspects of their shows. Even the comedies are calculated to tell ongoing stories. It reflects a timeless truth in television as in life itself: Follow the money