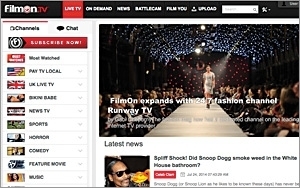 FilmOn's effort to obtain a compulsory license to transmit television programs on the Web has run into the same roadblock as a similar effort by Aereo -- the Copyright Office is refusing to process FilmOn's application.

“We understand FilmOn to be an Internet-based service that retransmits broadcast television programming. In the view of the Copyright Office, such a service falls outside the scope of the [compulsory] license,” Jacqueline Charlesworth, associate register of copyrights, wrote to FilmOn on Wednesday.

Charlesworth says the Copyright Office is accepting FilmOn's application on a “provisional” basis, but won't move forward with it at this time.

Earlier this month, Charlesworth sent a similar letter to Aereo, which also is applying for cable-system status, which would entitle the company to a compulsory cable license.

A coalition of television broadcasters on Thursday submitted the Copyright Office's letter to U.S. District Court Judge Naomi Reice Buchwald in Manhattan, who is considering whether to hold FilmOn in contempt of court.

Both companies argued that they were legal due the status, given their technology, which they said relied on dime-size antennas to capture and stream programs to users. But the Supreme Court rejected that argument in a case involving Aereo. The court ruled that Aereo infringed copyright by transmitting shows without a license, regardless of the company's underlying architecture.

Buchwald said at a hearing on Tuesday that FilmOn should have stopped transmitting programs as soon as the Supreme Court reversed the pro-Aereo ruling by the 2nd Circuit Court of Appeals. “The day the Supreme Court decided Aereo, you no longer had the cover of the 2nd Circuit's opinion,” Buchwald said at the hearing. “On that day, FilmOn X should have pulled all of the content.”

FilmOn, unlike Aereo, was already under a court order prohibiting it from infringing copyright due to an earlier lawsuit. FilmOn says it stopped offering streams of the major broadcasters' programs on July 8.

But FilmOn's lawyer, Ryan Baker, argued at the hearing that the company doesn't believe it infringed copyright between the time of the Supreme Court's ruling and the time it stopped offering streams of television shows. Baker says that FilmOn now believes it's entitled to a compulsory license as a cable system.

He also told Buchwald at the hearing that FilmOn had applied for a license and was waiting to hear back from the Copyright Office.

Buchwald said at the hearing that she was “inclined” to hold FilmOn in contempt, but hasn't yet issued an official decision