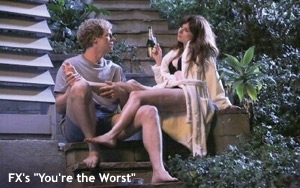 FX in recent weeks has made aggressive moves into the sitcom genre with the premieres of the single-camera comedies “You’re the Worst” and “Married” and the three-camera comedy “Partners.”

Of the three, “Worst” is arguably the best, even if it does go a little too far at times in making its two lead characters -- self-centered and relationship-challenged Jimmy and Gretchen -- as unlikeable as possible. I would rate “Partners” -- the story of mismatched lawyers who begin working as a team -- a distant second, even though it has significant issues, because it is powered by reliably entertaining performances from series leads Kelsey Grammer and Martin Lawrence.

It may look like FX is suddenly trying to make a name for itself in the sitcom field, especially at a time when good comedies (CBS’ “The Big Bang Theory” and “Mom,” ABC’s “The Middle” and “Modern Family,” TV Land’s “Hot in Cleveland,” HBO’s “Veep” and “Silicon Valley,” to name a few from the very short list) seem not merely to be exceptions but happy accidents in the development process. But this is not new territory for the network.

FX helped change the perception of what a situation comedy could be with the low-budget, single-camera crowd-pleaser “It’s Always Sunny in Philadelphia” (now on FXX) and the uproarious “Archer” (technically an animated series, but the comic performances by its voice actors are priceless). It has also enjoyed varying degrees of success with such mid-range efforts as “Wilfred” and “The League” (another show transplanted to FXX). And it has suffered a few flat-out failures (“Starved,” “Testees”), too.

Of course, FX is currently home to a wholly unique comedy the likes of which has never been seen before and which is widely regarded as one of the best programs of any kind anywhere on television, “Louie.”

For now, though, all eyes are on the newcomers. To begin with the worst first, “Married” before too long will hopefully go the way of “Starved” and other fast-faders in the FX vaults. Watching the first two episodes made me want to go to sleep; when I wasn’t bored I was depressed, not by the lame lives led by its miserable characters, but by the realization that a series like this one even made it onto any network’s schedule. The main character is horrible husband and father Russ (Nat Faxon) who seems to exist only to do stupid things and then lie about them to the people he claims to care about (his wife, his kids, his mistress, etc.). Maybe he’s driven to such behavior by his utterly charmless wife Lina (Judy Greer). It’s hard to tell. I’m going to blame the writers. They should all be made to binge on the entire run of “Everybody Loves Raymond” and learn that stories about being married, having children and living in the suburbs can be funny and heartfelt even when their characters are having bad days or craving sex. They don’t have to be jack-holes about it.

“Partners” is never going to get anywhere near any ten-best lists -- it looks too cheap for that, and it has a serious problem with pacing, an issue that its directors would be wise to address. As noted above, though, it is yet another fine comic showcase for the talents of Kelsey Grammer (whom, I would think, coming off a combined 20 years on “Cheers” and “Frasier” would have noticed that the energy level of the show has to be amped up a bit) and a smart comeback vehicle for Martin Lawrence. I would like to see everyone involved loosen up a little and the writing sharpen up a lot. If that happens there is no reason to believe that “Partners” won’t last for a while. Even as a work in progress it isn’t difficult to sit through, which places it above many of the new comedies set to debut next month on the broadcast networks.

Saving the best for last, “Worst” crackles with a sexy comic energy the likes of which I haven’t seen on television since the British version of “Coupling.” That’s not to say “Worst” is as strong a show as “Coupling.” It doesn’t even come close. But right from the pilot it felt very polished and professional, as if it had already been on television for a season or two and had worked out its kinks and strengthened its weaknesses.

Series leads Chris Geere and Aya Cash couldn’t be more engaging, even when their characters are behaving in as unsavory a manner as possible. It doesn’t hurt that they each have sex appeal to spare; in fact that’s probably a good thing given the explicitness of the bedroom scenes they share. (“Worst” is likely the second most sexually explicit sitcom on television right now after HBO’s “Girls.”) Geere and Cash are both charming and have vulnerable qualities that temper any negative response one might have to some of the terrible things their characters do, like stealing gifts from weddings and disrupting audiences at movie theaters.

I think FX is really on to something with this one, but I worry that the writers don’t know how to self-edit and that FX may be enabling them. For me, a scene at the end of the second episode in which our sexy, scrappy, self-involved lovers steal a woman’s beloved pet cat just for fun almost ruined the show for me. Try as I do I cannot find the funny in pet theft. (Imagine if someone stole your beloved cat or dog.) In that moment the characters became hateful; too much of that might drive viewers away.

There is a fine line between humorously awful and decidedly detestable. “Worst” should avoid it rather than seek to straddle it, because in every other respect this one is a keeper.