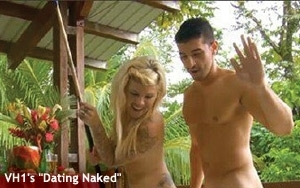 I guess we can all agree that bare behinds are harmless. They’re all over television these days and the world doesn’t seem to have spun off its axis.

VH1’s “Dating Naked” is currently at the forefront of the new wave of super-naked TV. TLC’s “Buying Naked” and Discovery’s “Naked and Afraid” got there first, but the nudity in both is supposedly not the focal point -- even if it does prompt people to tune in, and perhaps, turn on. After all, “Buying Naked” is an observational reality series about nudists, or at least one aspect of their lives (choosing homes in communities where they can do their thing and not be made to feel awkward about it). “Naked and Afraid” is about raw survival -- not necessarily of the fittest but of the most vulnerable. In truth, the nudity in both is incidental -- or comes to feel that way -- especially in “Afraid,” where as a viewer one’s focus drifts almost immediately from the skin on display to whether or not it is going to be cut or scraped or infected or bitten.

I think “Buying Naked” gets very boring very quickly, maybe because real estate isn’t a source of endless fascination to me. “Naked and Afraid,” on the other hand, is a perfect example of what used to be referred to as “Flypaper TV.” It’s totally addictive; marathons of this show are particularly hazardous to one’s schedule.

“Dating Naked” is something else altogether. It takes this new adventure in TV exposure to an entirely different plateau because it is all about nudity as a component of sexual attraction. All that bare skin matters. One guy and one gal each date three members of the opposite sex (including each other) and then choose the one they want to “get to know better” (as the kids call it these days). When boy meets girl on this show, both in their birthday suits, their eyes immediately (and naturally) go to certain places, and as might be expected in so revealing a situation, there is often much nervous chatter about it. It’s almost charming to watch these young men and women pretend that they aren’t assessing each other’s bodies at first sight. How could they not help but do so?

As Chuck from Miami said when he met Kristin from Beverly Hills, “her boobs were like, wow!” Later, Kristin couldn’t help but gush that Chuck “has a nice ass.” In the same episode, Camille from Las Vegas said of Rob from Casselberry, FL: “I couldn’t help but notice that his penis looks like a baby’s arm holding an apple.” And later, when Rob and Camille were playing pool, Camille kept commenting (for the viewer’s ears only) that she felt “his pool-stick.” When Camille was later interacting with poor Julian from Garland, TX, he was perpetually erect, an embarrassment for him and a big challenge for Camille and, presumably, the “Dating Naked” post-production team.

That must be an interesting gig -- pixilation supervisor on nudity-driven reality programs.

Actually, even with the pixilation -- which is barely there, covering only the women’s breasts (sometimes not entirely) and everyone’s genitals -- I can’t recall ever seeing so many naked bodies in motion doing all kinds of things on any television series, including the scripted variety. The mostly very fit couples on “Dating Naked” swim, dive off boats, play pool, do yoga, etc., all with the cameras right there. In scripted shows we sometimes see naked actors pretending to have hot and heavy sex in intimate close-up -- something that is never seen on this new wave of naked reality shows, although the action on “Dating Naked”  sometimes comes close -- but those scenes are artfully directed and generally very brief. They aren’t “real.”

The nudity on display in “Dating Naked,” on the other hand, is unprecedented in its frequency and presentation. How the world has changed: I can’t imagine what it would have been like to have easy access to a show like this during adolescence.

Arms, legs, abs and heinies aside, there is an actual relationship component to “Dated Naked” that brings a bit of welcome drama to this frisky flesh fest. At the end of each episode, when the participants choose one of the three people they have dated to pair off with, someone’s feelings are invariably hurt. Some of them -- like firecracker Katie from Forest Hills, NY – have really lost it. “[Bleep] this place, [bleep] this island, [bleep] you, VH1!” she ranted with a middle finger in the air after dim jock Keegan from Rahway, NJ, chose sweet Jessie from Plainview, NY over her. Rejection will do that to a person, especially when he or she has literally put it all out there.

But the end result is sometimes reassuring. If we are to believe what we hear -- which isn’t always convincing -- sometimes the men and women on “Dating Naked” make choices based on the personalities of the people they have dated rather than their bodies or sex appeal. There is value in being reminded that people have feelings -- even the young and hot ones.