Premature Prognostication About The Fall Freshmen on ABC, CBS and NBC 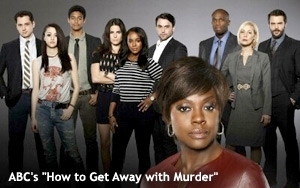 Pilots or first cuts of premiere episodes of the 2014-15 broadcast freshman class have been available to journalists, advertisers and others since May or June. They have been heavily discussed during the upfront, thoroughly and publicly examined during the recent Summer Television Critics Association tour and previewed for the masses at the San Diego Comic-Con.

And yet -- a little over one month from the official start date of the new television season -- critics are still not free to review them. This is nothing new. Screeners are provided to all interested parties months in advance of their premieres, with the clear understanding that they will not be reviewed, as any or all of them are considered works in progress, even though most of them will change not at all or very little before they make their official debuts. Still, some have been or will be re-edited, some have had roles recast and there is much technical sweetening to be done that may make a seemingly flat pilot come excitingly alive.

Before long, the networks will begin making final “review-ready” episodes available to critics, or they will send out notification that the pilots they distributed months ago are okay to use as official review copies. But after living and working with these new shows for almost three months it doesn’t seem unreasonable to begin offering carefully considered opinions about the fall freshmen, with the responsible caveat that these are not official reviews or the final word on any of them.

Remember, I may be totally off base, as I was last year when I picked CBS’ “Hostages” and NBC’s “The Michael J. Fox Show” as two of the 2013-14 season’s brightest offerings simply because they had great pilots. And I still don’t know what to make of “Marvel’s Agents of S.H.I.E.L.D.” which I championed as one of the best and over time came to dislike. (At least I was right about NBC’s “The Blacklist” and ABC’s “The Goldbergs.”)

Surprisingly, this year I think ABC has the best crop of new shows ready to go for fall and midseason. I’m surprised because the descriptions I read and the clips I saw during upfront week last May didn’t impress me very much, nor any of the many critics with whom I discussed them at the time. Maybe it was ABC’s unimpressive presentation and its vague positioning of its product. And then there was the TCA tour; I hadn’t received the ABC screeners by the time the tour began and have been catching up ever since. But I detected no particular interest among critics in anything ABC was offering, with the exception of the new legal drama “How to Get Away with Murder” from executive producer Shonda Rhimes.

But now that I’ve seen ABC’s shows, I’m particularly impressed with the drama “Forever,” I think there is great potential in the comedy “black-ish” (though the pilot wasn’t as good as it could have been), and, like many other reviewers, I continue to think that “Murder” is one of the most compelling new series of the upcoming season. The rom-coms “Selfie” and “Manhattan Love Story” left me cold (though “ordinary people” with whom I watched them thought they were very good) and the midseason musical comedy “Galavant” looks like a real treat. Further, midseason drama “American Crime Story” is going to make some noise when it has its premiere.

Conversely, no shows at CBS or NBC have jumped immediately onto my personal must-watch list, which makes my positive reaction to ABC’s shows all the more significant. My feeling of being underwhelmed by CBS and NBC may not be general broadcast malaise after all, as my enthusiasm for ABC’s new shows has proven.

If I had to pick a probable success at CBS I would choose “NCIS: New Orleans” for obvious reasons. The horrific “Stalker” will likely appeal to the enormous “Criminal Minds” crowd but I don’t think it is ever going to agree with me. The “Scorpion” pilot is huge fun but I can’t imagine how it will maintain that same level of energy and excitement. (I will be very happy if the show negates my early concerns.) “Madam Secretary” didn’t grab me the way the first episode of “The Good Wife” did six years ago but I’m not giving up on it. I like to think “The McCarthys” will improve with time but I’m not betting on it. CBS’ midseason entries “CSI: Cyber” and “Battle Creek” hold more promise.

Over at NBC, only the supernatural thriller “Constantine” made a strong first impression on me. For reasons I won’t go into here I have watched the pilot for the comedy “Bad Judge” three times – suffice it to say that it doesn’t hold up well during repeat viewings. I like NBC’s rom-coms “Marry Me” and “A to Z” better than the two at ABC, but that isn’t saying much. As for “The Mysteries of Laura” and “State of Affairs,” for now I’m adhering to that sage advice, “If you can’t say anything nice don’t say anything at all.” I’m refraining from any additional commentary until I see finalized pilots and/or additional episodes out of respect for all of the talented people involved with these two shows – folks whose work I have been impressed with in past projects.

What about the new offerings on Fox and The CW? I’ll get to all those shows next week.

tv
1 comment about "Premature Prognostication About The Fall Freshmen on ABC, CBS and NBC".
Check to receive email when comments are posted.
Next story loading