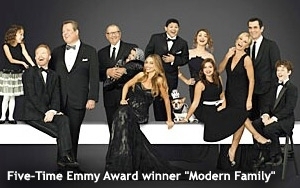 The always agreeable and effortlessly charming Seth Meyers certainly isn’t afraid to bite the hand that feeds him.

Those of us who attended NBC’s upfront presentation in New York City last May can readily recall the many jokes he fired off that ripped into his network’s decision to hold that event at the decidedly unglamorous Javits Center. (He was dead on, by the way.)

Meyers was true to form as host of the Emmy Awards last night, making merciless fun of the show itself during his opening monologue. “This year we’re doing the Emmys on a Monday night in August, which if I understand television means the Emmys are about to get cancelled,” he said with a bright smile that never once faded when he was on stage. (What a shame that this show, which served quite well at celebrating television programming, was shoved off into the last week of August, a time when most people could care less about it.)

The barbs kept coming. “MTV still has an awards show for music videos even though they no longer show music videos,” Meyers noted. “That’s like network TV holding an awards show and giving all the trophies to cable and Netflix.” (Interestingly and despite widespread industry predictions, Netflix didn’t do very well at all during the three hours that followed.)

Perhaps his most withering remark came next. “This will be the final season for shows like ‘Glee,’ ‘Two and a Half Men’ and ‘Sons of Anarchy,’” he said, adding, “as well as almost every new show to premiere this fall.” The joke was very funny, even if the reality of the situation is a disgrace.

Watching Meyers deliver his jokes wasn't all that different from watching him on his late-night NBC series “Late Night with Seth Meyers.” But I thought he was just fine at the top of the show and throughout the fast-moving telecast. (A word about that: While I appreciated the fact that the Emmy Awards were over and done in three hours, was it really necessary for Vince Gilligan to be rushed through his acceptance speech at the end when the cast of “Breaking Bad” was taking its last ever Emmy bow? I guess that was network TV flexing a weakening muscle against cable.)

There really isn't any point in complaining about any of the winners, although many of the top awards felt repetitive and seemed to reflect a lazy attitude on the part of voting members of the Academy of Television Arts & Sciences. ABC's “Modern Family” is still a very good show, but did it need a fifth consecutive Emmy at the expense of such deserving comedies as CBS’ “The Big Bang Theory,” FX’s “Louie” or Netflix’s game-changer “Orange is the New Black”?  Were the performances by Jessica Lange and Kathy Bates in FX’s “American Horror Story: Coven” truly superior to those of the other nominees in their categories? Didn’t CBS’ aging “The Amazing Race” already have enough awards?

My complaints are with other aspects of television’s big night. While I was as moved as everyone else by Billy Crystal’s heartfelt tribute to his friend Robin Williams, I was surprised that executives at the Academy of Television Arts & Sciences didn’t see fit also to designate an extra couple of minutes on behalf of the late Sid Caesar, as important a player in the history of television as anyone ever has been. I realize the man lived to a ripe old age and that most of the young people working in television today have no idea who he was or no particular understanding of his massive contribution to the medium, but come on! If members of ATAS aren’t going to honor true television legends, who will?

And speaking of really bad moves on the part of Academy executives, whose boneheaded idea was it to display the breathtakingly beautiful Sofia Vergara on a rotating pedestal while ATAS Chairman and CEO Bruce Rosenblum spoke about all the good things that the Academy does to advance television? It was so wrong in so many ways -- but impressively, neither one of them looked humiliated during this segment. I assume heads are rolling or butts are being kicked today in the hallways of that grand institution.

I don’t want to end this column on a down note. The Emmys overall were well done and engaging throughout. That strange bit with Weird Al Yankovic was a waste of time -- time that might have been better spent letting Vince Gilligan and Steve Levitan complete their speeches without being rushed. But the entire event felt formal, complete and quite a bit satisfying, even if it seemed to be taking place in an energy-free void during the dog days of summer. Also, even with all the fuss about the “superior” programming on cable and streaming services, it was nice to see so many major awards go to broadcast series (“Modern Family,” “The Amazing Race”) and performers (Ty Burrell, Jim Parsons, Julianna Margulies -- even Benedict Cumberbatch and Martin Freeman, nicely representing “old school” PBS with their wins for “Sherlock: His Last Vow”).

awards, awards show, tv
1 comment about "A Very Good Emmys Telecast Was Sadly Relegated To The Dog Days Of August".
Check to receive email when comments are posted.
Next story loading