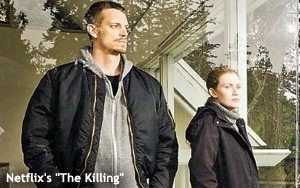 The fourth and final season of “The Killing” may turn out to be the best original production yet from industry agitator Netflix.

If nothing else, it is turning out to be the most satisfying transition of a series from “traditional” television to a new digital platform. “Arrested Development” (also on Netflix), “All My Children” and “One Life to Live” all suffered creatively in their moves from Fox and ABC, respectively, to streaming services.

Not “The Killing.” From what I’ve seen it is better than ever in its new home. I’ll withhold a definitive declaration, as I have watched only the first three of the six episodes Netflix ordered. It is simply too good to rush through and treat as a six-hour movie. I have chosen to live with it for a few weeks and enjoy it during that time. The anticipation of waiting to see what happens next is half the fun.

Furthermore, I found that my enjoyment of the second seasons of Netflix’s mighty “House of Cards” and “Orange is the New Black,” two of the most binged series on any platform, was significantly compromised by rushing through them. “Cards” suffered in particular; by the end it seemed to me that all the show had been about was two wealthy and powerful people destroying the lives of everyone around them -- the words “Hulk smash” kept going through my mind. Had I put more space between episodes that might not have been the case. “Orange” also took on a repetitive quality that I won’t get into here out of respect for those who have yet to watch it. My advice is, slow down.

Like many people, my relationship with “The Killing” has been mixed at best. I thought the first half of its first season on AMC was as profound as just about anything I had watched on television in many a decade. Then it seemed to lose focus, it didn’t solve its central mystery by season’s end, and it dragged out that same story for an entire second season in a punishingly slow and uninteresting manner. At that point the show was cancelled, but a short while later it was surprisingly un-cancelled, and its third season on AMC proved to be its best. But it ended in a way that left certain significant story elements unresolved. Then its first three seasons proved to have significant Future Viewing Potential on Netflix, and the service smartly ordered up six more episodes to provide a more satisfying conclusion for its binge-prone viewers.

Again, these six shouldn’t be rushed through. Something about them strikes me as superior to the episodes I remember on AMC. The production values seem a bit more polished. The performances by leads Mireille Enos and Joel Kinnaman were always first-rate, but they are both truly at the top of their game here -- perhaps because they are allowed on Netflix to play huge dramatic moments with a little more realism. For example, when things are going wrong for their characters, as they always do for Detectives Linden (Enos) and Holder (Kinnaman), they are allowed to drop an F-bomb or two, just as one would do in real-life situations where the pressure was unbelievably frustrating or overwhelming.

Also, there are entire sequences in which there is sunshine in Seattle -- and there has been very little rain so far. During the first three seasons it seemed as though Seattle was always gray and rainy and foreboding and awful. But now the region sometimes actually looks quite beautiful and inviting. Linden’s life remains a deep, dark mess -- especially after her actions at the end of Season Three, the ramifications of which continue to play out in Season Four as a sensational subplot. But Holder has actually found some happiness and is trying to balance things out. These occasional moments of relief are something new for this franchise and very welcome.

The storyline, about the brutal slaying of most members of a wealthy Seattle family and the strange behavior of its sole surviving member -- a teenage boy enrolled at a strict military academy -- is as absorbing and intense as any other in the history of this show. If I have any complaints with it so far, it’s that the cadets at the academy seem uniformly psychotic in their general nastiness. But the young actors portraying them are doing great work, as is Joan Allen as their commanding officer, a character as mysterious as every other one in this story.

I can already imagine Allen, Enos and Kinnaman being nominated for Emmys next year in the miniseries categories, where Season Four of this long-established drama series and its performers will almost certainly be submitted unless the Academy of Television Arts & Sciences gets a handle on its own rules.

Regardless, these fresh episodes of “The Killing” are so well done and so rewarding (at least so far) that they could indeed be game-changing. Here’s genuine proof that when broadcast and basic cable networks end shows before their time or in ways that aren’t particularly satisfying to viewers they can indeed continue somewhere else and be better than ever. They can also be brought to a close in the right way, ensuring that generations to come won’t have reason to regret devoting huge amounts of time to watching them in their entirety.

netflix, streaming, tv
1 comment about "The Fourth Season Of 'The Killing' May Be Netflix's Best Original Series Yet".
Check to receive email when comments are posted.
Next story loading