Appreciating 'The Waltons' - Then And Now 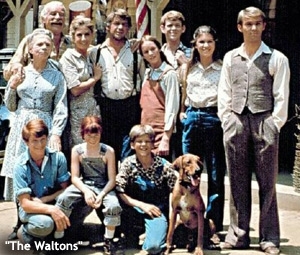 I wouldn’t call it a binge, but lately I have been getting reacquainted in a big way with the classic ‘70s drama “The Waltons” -- a series I recall enjoying in my youth, but one that I hadn’t given a lot of thought to since.

Regular readers of this blog will recall that an episode of “The Waltons” from Season Nine about the arrival of television on Walton’s Mountain caught my eye several months ago. I’ve been sampling episodes of the show ever since. Some I remember watching the first time around; others are completely new to me because I stopped watching “The Waltons” midway through its first run and never went back.

Thanks to Hallmark Channel, which runs several episodes of “The Waltons” on weeknights, I have been able to easily review episodes from the first two seasons of the show, when it was at its very best. And I am more impressed by it than ever before.

I didn’t really think about what I was watching when I was a kid. I simply reacted and enjoyed. That was certainly true of my experience with “The Waltons,” which in its day was heralded as an outstanding family drama. Richard Thomas received much praise (and an Emmy Award) for his portrayal of young John-Boy. In fact, all of the characters and the actors who portrayed them were recognized in one way or another for the fine work they were doing. As the show continued through subsequent seasons the Emmy nominations and awards kept coming.

But time, adulthood and a career as a television critic have me looking at the show now in an entirely different context than I did way back when. To begin with, I now understand that “The Waltons” was the first true family drama on broadcast television. (Apologies if there are any prior family dramas with which I am unfamiliar.) Significantly, only a few family dramas have followed, most of them in the ‘70s, including “Apple’s Way,” “Eight is Enough” and “Family.” They were fun at the time but didn’t exactly make history, and they haven’t been very visible since. The next family dramas of any note wouldn’t come along until the current millennium: HBO’s “Six Feet Under” and NBC’s “Parenthood.” (I’m excluding dramas with families in them such as HBO’s “The Sopranos” and CBS’ “Blue Bloods” that fall into other categories first, such as crime shows or police shows.)

As far as family drama goes, there had never been anything like “The Waltons” and there hasn’t been since. The same can be said of the performance of Richard Thomas, which I now recognize in hindsight as one of the best, bravest and boldest in the history of the medium. Had there ever been a drama series with a teenager as its lead character? (Thomas was in his early twenties when he first played the role.) Had we ever seen a teenage male in a television series that was depicted as unashamedly sensitive and caring? (That’s not to imply that John-Boy was a wimp. In an episode from Season One he picks up a large stick and threatens to clobber a homeless youth he perceives as possibly menacing to his younger siblings.) The only other teenager I can recall as having genuine emotional complexity on any television series before “The Waltons” is “Bud” Anderson (played by Billy Gray) on “Father Knows Best,” though he wasn’t in a league with John-Boy. (My newfound familiarity with “Father Knows Best” comes as a result of watching it on Antenna TV.)

Sensitive, multidimensional teenage characters began appearing with some frequency in television dramas after “The Waltons” – including “Buddy” (Kristy McNichol) and Willie Lawrence (Gary Frank) in “Family,” James Hunter (Lance Kerwin) in “James at 15/16,” Angela Chase (Claire Danes) in “My So-Called Life” and Buffy Summers (Sarah Michelle Gellar) in “Buffy the Vampire Slayer,” plus all those moody kids in “Dawson’s Creek,” to name a few. But John-Boy got there first, at a time when viewers weren’t used to seeing young men portrayed that way. The character was the object of much derision in schoolyards but much admiration elsewhere.

Thomas nailed it, and his work holds up spectacularly well today. Watch for a rerun of “The Love Story” from Season One as a prime example of a young actor in top form. I believe it is the episode that won Thomas the Emmy as Outstanding Lead Actor in a Drama Series, which was yet another “Waltons” first. Before Thomas no actor had ever won an Emmy for portraying a teenager.

In another first, when Ellen Corby -- who played Grandma Walton -- suffered a stroke in real life, her character was also stricken. After a relatively brief absence Corby (who won three Emmys for the role) returned to the show as a stroke survivor portraying a stroke survivor. Her performance was stunning.

I’m also impressed by the way “The Waltons” -- which was set in rural Virginia and at the start took place during the Great Depression -- handled the subject of religion. I remembered that John Ritter portrayed an arrogant young preacher whose fire-and-brimstone intensity alienated people. But I had forgotten that Olivia Walton was a Baptist, that her husband John was not a religious man and that they would sometimes clash over their choices about how to raise their children. Also, there was a fascinating episode in Season One in which a Jewish family that had fled Nazi Germany was seeking a peaceful life on Walton’s Mountain. To ensure their safety, the father insisted that they hide their faith and that his son not experience his bar mitzvah.

Nobody could have known at the time that “The Waltons” would occupy a singular position in television history that would hold for decades to come. I can’t help but wonder why the Academy of Television Arts & Sciences or the Television Critics Association (which every year honors programs and performers who have made extraordinary contributions to the medium) have not done more to recognize the contributions in hindsight of this extraordinary show.

Furthermore, one almost never hears or reads anything about it in the entertainment media unless someone in its cast passes away. Thank heaven for the Hallmark Channel; without it, “The Waltons” might be all but forgotten today.

tv
6 comments about "Appreciating 'The Waltons' - Then And Now".
Check to receive email when comments are posted.
Read more comments >
Next story loading