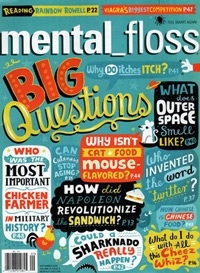 As media consumption habits continue to evolve, magazine publishers big and small are embracing online video to stay relevant in a media landscape increasingly dominated by sight, sound and motion.

One of the unexpected winners is trivia and knowledge magazine Mental Floss, according to The New York Times, which noted the quirky title’s success with a series of online videos hosted by John Green, author and YouTube star. (Disclosure: the author also writes for Mental Floss).

Green’s rise to stardom is a phenomenon in its own right: a self-proclaimed “nerdfighter,” he achieved fame with “The Fault In Our Stars,” a young adult novel about two teenagers with cancer that was a runaway bestseller before being turned into a tearjerker movie released this summer. The book inspired a fanatical following among readers -- especially teenage girls, who in turn focused their affections on the boyish Green.

Green had written for Mental Floss earlier in his career as an aspiring author. After he catapulted to fame, the publisher, owned by Dennis Publishing, contacted him about producing a series of online videos focused on trivia. In the segments, which typically run eight minutes long, Green expounds intriguing tidbits in rapid-fire fashion, covering subjects like “26 Amusing Facts About Amusement Parks,” “25 Famous People Who Were Once Interns,” “33 Amazing Toy Facts,” “50 Common Misconceptions,” and “20 Misconceptions About Sex.”

The NYT notes that Green’s fan base has helped turn the short videos into big business for Mental Floss, racking up a total of over 81 million views since the first video was posted in February 2013, citing figures from Visible Measures. That, in turn, has attracted advertisers including Lexus, Geico, and Dos Equis, which now account for around 5% of the company’s total revenues.

According to the companies, Portico TV reaches over 30 million screens including smart TVs from Samsung, LG, Sharp and Philips, Roku-connected TVs, and Toshiba tablets and notebooks. The show is also available online at www.portico.tv. Last week Meredith Corp. announced that it is partnering with Net2TV to launch a new streaming on-demand TV show, based on the Better Homes and Gardens brand. The new 30-minute program, which premiered August 27, will air twice a month and is available to viewers with Internet-connected televisions.

Gina Sanders has been named president of global development by Condé Nast. In this newly created role, Sanders will work with current and prospective partners around the world to create new business opportunities. Sanders will maintain offices in both New York and Paris. She previously served as president and CEO of Fairchild Fashion Media, which Condé Nast just sold to Penske Media Corporation last month. Before that, she served as vice-president and publisher of Lucky, and was the founding vice-president and publisher of Teen Vogue, among other positions.

Grayle Howlett has been named chief revenue officer for TV Guide Magazine/OpenGate Media Group, with responsibility for all advertising revenue across print, digital, event and partnership platforms, the company announced this week. Before joining the OpenGate Media Group, Howlett served as group publisher at the North American Media Group, overseeing a number of publications, including The History Channel Magazine. Before that, he served as president of Blackbook Media and publisher of both Radar and Tracks.