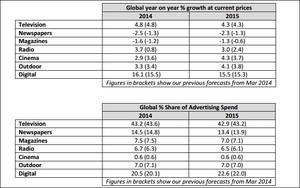 Just weeks after one major agency forecast, Interpublic’s Magna Global unit, reduced its outlook for 2014 ad spending, another -- Dentsu Aegis Network’s Carat -- has upgraded it a smidge. And like Magna, Carat is optimistic the outlooks for 2015 will be even better.

Citing “optimism” across most of the 59 national markets it analyzes data for, Carat now predicts worldwide ad spending will expand 5.0% this year, a two-tenths of a point improvement from the 4.8% expansion it predicted in March. The U.S. market has improved even more. Carat has revised the U.S. ad expansion to 4.9%, up from a prediction of 4.3% in March.

While Carat did not boost its outlooks for global and U.S. ad expansion in 2015 -- +5.0% and +4.6%, respectively -- it said it is standing by it’s earlier predictions because of “encouraging” signs that all key markets will return to “positive growth” next year.

Describing the revision as a basis for “increased optimism,” Dentsu Aegis Network CEO Jerry Buhlmann stated it’s another indication that the ad industry has firmly pulled out of the global recession that derailed ad spending following the economic crisis in 2008.

With "a healthy trend of 5% year-on-year global ad growth, there is positive momentum building across the industry,” he noted.

Not surprisingly, Carat is most bullish on the expansion for digital media, which will continue to expand share of overall advertising budgets as economics conditions improve. Carat defines “digital” media as search, display, online video, social media and mobile, and said that as a category it would expand more than three times faster (16.1%) than the overall ad economy and will account for 20.5% of total ad spending in 2014, and 22.6% in 2015.

“Whilst the steady decline in print is expected to continue, all other mediums are predicted to achieve year-on-year growths of approximately 3%-5% in 2014 and 2015,” the report predicts.