The Hard Life Of The Ad Executive, As Explained In The Classic Cop Drama 'Adam-12' 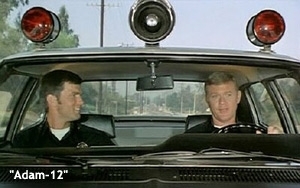 Has the life of the advertising executive always been a tough one -- one so demanding that it even prevents spending time with one’s children? According to a storyline in an episode of the classic cop drama “Adam-12” recently telecast on the invaluable retro channel Me-TV and first seen 40 years ago (on March 12, 1974), advertisers and their families have never had it easy.

The storyline is one of many in an episode filmed entirely at LAX, which is seen as open and organized and chaos free. Some of that relative serenity is certainly due to the specifics of the production, but the enormous differences between a major airport then and now can’t help but stand out. Given the vast changes in the airline industry, air travel, security and at LAX itself since that time, the episode is now something of an actual historical artifact that will seem utterly foreign to younger people and sweetly nostalgic to older folks.

The overworked advertising executive mentioned above is never even seen during the half-hour. His story actually involves his teenage son, a boy named Keith whose parents were divorced and who had taken it upon himself to leave Los Angeles without notice and visit his father in Chicago. Keith had attempted to run off twice before without success, but this time he had actually done it and was now returning home. Officers Pete Malloy (Martin Milner) and Jim Reed (Kent McCord), temporarily assigned to patrol LAX (where they moved about on nifty little scooters), were asked to meet the boy and escort him to his worried mother. They found him, fresh off a plane from the Windy City and looking decidedly dejected.

He explained to Reed and Malloy that his father, who was granted a month of custody every summer and also time every Christmas, was often simply too busy to see him. All the poor kid wanted to do was spend some time with his dad!

His visit the previous summer hadn’t been very fulfilling. “I went to 24 ballgames by myself,” Keith told the officers. “My dad wanted to come with me, but in the advertising business, boy, you really gotta work,” the understanding boy added.

I found it interesting that the writers of the episode had made the decision to designate advertising as the career Keith’s dad was so caught up in that the kid had to go to ballgames all by himself when visiting him in Chicago. Dad could have been a politician, or a lawyer, or a doctor and an executive in some other field. Instead, he was either a big bad advertising executive or an underling being crushed from above.

That was just one of the attention-grabbing moments in this episode of “Adam-12,” appropriately titled “L.A. International.” LAX turned out to be a hotbed of criminal activity on the day of Reed and Malloy’s assignment, even though there wasn’t a hijacker or terrorist to be found.

There was a guy who smashed the window out of a car and stole the purse of a woman who had left it on a front seat. There were two men trying to board a plane with a suitcase full of “grass.” Another man had stolen “300 dollars in Japanese yen” from a fellow passenger. There was an attempt at credit card fraud thwarted by a helpful and pretty young ticketing agent (played by Tina Cole of “My Three Sons”) in whom Malloy took an immediate interest. (At the end, the credit card company rewarded them with dinner for two.)

Also, Reed and Malloy apprehended an armed robber who was hiding out in a mustard-colored van (with curtains covering the windows). It was a simple arrest -- in fact, one of the things that struck me about the episode was that every arrest was civilized, at least by today’s standards. The worst thing any of the criminals did was to run (although they never got very far). In most cases everyone did exactly what Officers Reed and Malloy told them to do!

Imagine if this episode had been shot today. At the very least, the robber in the van would have taken a few shots at Reed and Malloy, possibly injuring one of them, and very likely harming or killing one or more innocent passersby. (Life is often cheap on cop shows today.) The men with the pot would have been carrying a much more dangerous drug and would have been much more menacing.

Indeed, young Keith would have probably committed a crime or two just to get the money to fly to Chicago. In his scene, he explained that he saved money from his $1.75/hour job and birthday gifts to buy the ticket.

Like I said above, old shows like this one can seem absolutely otherworldly when viewed today. But that makes them enjoyable in a whole new way.