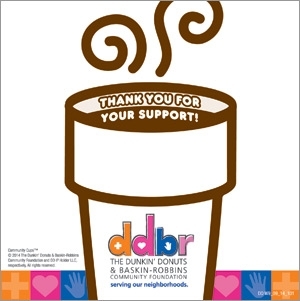 Through Sept. 29 — National Coffee Day — servers at U.S. Dunkin' and combo Dunkin'/Baskin-Robbins restaurants will ask customers if they would like to donate $1 to the foundation, which helps communities address basic needs, including ending hunger and ensuring health and safety for children.

Those who donate will receive a paper icon featuring the Dunkin’ coffee cup (shown), to sign and have displayed in the restaurant.

To raise awareness for the initiative, Dunkin' Brands will post on both brands’ Facebook and Twitter pages and on the foundation's Facebook page, and Dunkin's blog, Behind the Beans, will feature a post about the program, says Christine Riley Miller, senior director, corporate social responsibility.

In addition, Mother Nature Network, a partner that helps Dunkin' Brands publicize its environmental and charitable initiatives, will publish an informational post about the program.

Dunkin' Brands and its franchisees have run several local versions of the Community Cups programs in the past, Miller tells Marketing Daily. For example, last fall, franchisees raised more than $153,000 to benefit the DDBRCF and various nonprofit organizations in the Southeast region, including Safe Kids Florida, St. Joseph’s Hospitals Foundation and the Palmetto Health Foundation.

Since launching in 2006, the DDBRCF and franchisees have raised more than $4.5 million for community organizations through local, in-store programs, special events and other vehicles. In March, the foundation announced a three-year partnership with Feeding America in which the DDBRCF will provide a $1 million grant to the nonprofit.

Dunkin' Donuts is also marketing National Coffee Day by offering a free medium, hot cup of its new Dark Roast Coffee at participating U.S. locations around the U.S. In addition, from Sept. 30 through Oct. 5, a medium cup of hot Dark Roast is only 99 cents. (The new roast, which is Rainforest Alliance Certified, is also available as iced coffee, but iced is not part of the special free and 99-cent offers.)