CMOs Just Aren't That Social -- And Who Cares?

I wanted to react to Catharine Taylor’s recent column about the lack of social media activity by CMOs. She refers to Infegy’s list of the Top 50 most social CMOs in 2014, as measured by number of retweets, interactions, shares and so on. Catherine is not impressed by the fact that only nine of the Top 50 CMOs are from Fortune 50 companies. In other words, CMOs from big, well-known companies are absent in social media.

But I say: Who cares? I cannot for the life of me recall an occasion where a tweet or Facebook status update from a CMO has pushed me to buy or try a product or service. Can you? Can any of your co-workers or family members? Anyone who is in line at Starbucks right now, as you read this? Go on, I dare you to ask if they even know the name of the Starbucks CMO. Or if they even know what a CMO is. Or does.

The debate about the C-suite using social media has been raging for a good few years, with discussions such as the Wall Street Journal piece headlined “140  Characters of Risk: Some CEOS Fear Twitter.”

In fact, some company leaders are celebrities: Your Mark Cubans. Your Richard Bransons. But most C-suite leaders are probably known within the industry they work in, but mostly unknown to the consumer at large. And that’s probably how it should be.

That does not mean any major exec should or should not be active on social media. But before any C-suite member takes to the Twitterverse, he or she should go through the simple assessment I laid out in Maarten’s Common Sense Reasometer: 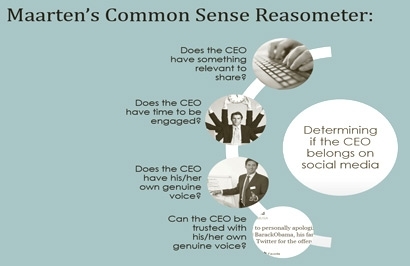 1.   Does the CEO/CMO have something relevant to share? This may well be the case, and does not depend on whether they are celebrities or not in their industry or at large. Friends of mine run an artisanal bakery, and they certainly have stuff to share (@wavehillbreads -- announcing a new client, where you can find their products, the next farmers market they will be at, etc.). But if the content is only relevant to family members, then the leader in question is probably better off publishing under any name but his linked-to-his-business name. (Use your wife’s maiden name for instance -- and have at it!)

2.   Does the CEO/CMO have time to be engaged? Let’s face it, one interaction a month does not cut it. So only join the bandwagon if you have the bandwidth to do it. And if the going gets a little rough, don’t go all silent on us, either. I am looking at you, @nflcommish.

3.   Does the CEO/CMO have his/her own genuine voice? Don’t set up a Twitter account and then hire a PR firm or a junior digital marketer to tweet on your behalf. Are you listening, @SeppBlatter?

4.   Can the CEO/CMO be trusted with his/her own genuine voice? This is perhaps the most important question. History is littered with examples of C-suite members going off the rails with rants, attacks and other stupidities that did more harm than good to their name and their business. Trump, Murdoch, Donald Sterling, Reed Hastings, Jack Welch, John Schnatter, John Mackey -- the list goes on and on. Think before you tweet!

So join the fray if you must. But if you do it on behalf of your business, use common sense first, and then look to your humility and authenticity.

social media
4 comments about "CMOs Just Aren't That Social -- And Who Cares?".
Check to receive email when comments are posted.
Read more comments >
Next story loading