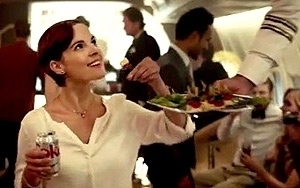 In the latest effort to stem diet soda sales declines, Diet Coke will launch a new campaign, "Get A Taste," during the season premiere of ABC's "Nashville" on Sept. 24.

The campaign, from the brand's agency of record, Droga5 New York, focuses on the brand's "unique, delicious taste" -- reminding fans "why they fell in love with Diet Coke the first time," and "inviting everyone to experience the magic behind the taste," summed up Andrew McMillin, VP, Coca-Cola Brands, North America.

The first 30-second spot, “Economy Class,” shows a young woman suffering through a crowded, noisy overnight plane flight. When she sips a Diet Coke, the cabin is transformed into what appears to be a '60s-influenced club party, complete with a live band with bass player, dancing, hors d'oeuvres and cute guys in narrow ties.

The ad will also air on the season premieres of “Scandal” and “Grey’s Anatomy” on Sept. 25.

A second spot, dubbed “Car Wash,” will air in early October. In that one, a woman's sip of Diet Coke transforms a car wash into a "Gatsby-style" party featuring dancers in flapper dresses, trapeze artists, break dancers and water that turns into confetti.

The campaign's third spot, to launch later this fall, will feature the brand's celebrity spokesperson, Taylor Swift, reports the company.

The campaign will also include online media partnerships, digital video (including partnerships with Vine filmmakers), print, radio, out-of-home and activations on the brand's social media channels and DietCoke.com.

While Diet Coke remains the nation's #2 soda, behind regular Coke, its sales volume dropped 6.8% last year, and rival Diet Pepsi's dropped 6.9%, according to Beverage Digest. (In comparison, sales volumes for regular Coke and regular Pepsi declined 0.5% and 3.6%, respectively.) Overall consumption of diet soda, which accounts for almost a third of total U.S. soda sales, has been in decline for three years.

In late July, Coca-Cola Co. reported that the overall Coke brand's volume was up by 1% in North America in the second quarter — a positive departure from recent years' negative trends, partly driven by its marketing investment around the FIFA World Cup and the start of its popular "Share A Coke" campaign. But Diet Coke sales in the region were improved only a bit from the first quarter's now-typical mid-single-digit decline.

Chairman and CEO Muhtar Kent cited insufficient marketing, as well as the consumer trend away from artificial sweetener consumption, as contributing to Diet Coke's decline, adding: "We recognize we have more work to do here."