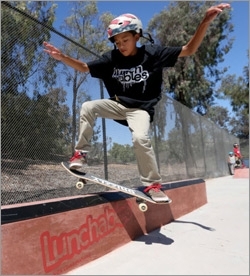 Kraft Food Group's Lunchables Lunch Combinations is helping Boys & Girls Clubs of America (BGCA) renovate the clubs as part of the brand's partnership with the organization.

To kick off and generate awareness for the program, professional skateboarder and MTV star Rob Dyrdek, founder of the SLS (Street League Skateboarding) Foundation, joined Lunchables on Sept. 23 to unveil a newly upgraded skate park at the Boys & Girls Club in Chula Vista, Calif. (Dyrdek, who became Lunchables' celebrity ambassador last year, is currently featured in the second season of a series of "Fully Uploaded" videos for Lunchables on the brand's Twitter and Facebook accounts, promoting the brand's Uploaded line extension, targeted to teens.)

This is the second year of a five-year partnership in which Lunchables is donating $200,000 per year, up to $1 million total, to the Boys & Girls Clubs. This year, $75,000 of the donation went toward upgrading the Chula Vista club's skate park with new obstacles and other features.

"We are proud to contribute to an organization with a history of providing vital resources to kids including tutoring, sports and other programs that help kids thrive,” said Joe Fragnito, VP of marketing, Lunchables Lunch Combinations.