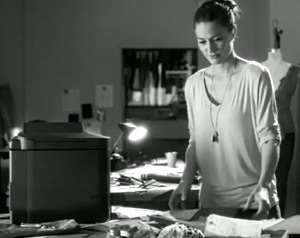 With home printers too small and most business printers too large, Canon is looking to create the just-right printer for small businesses with its new “Maxify” line of printers.

“This is a completely new brand geared to the small office and home office user,” Kevin McCarthy, marketing supervisor at Canon, tells Marketing Daily. “Canon has a wide range of printers, [but] the one thing we didn’t have was a small business platform.”

The new brand launched Tuesday with an integrated marketing campaign that shows off how Maxify printers help in the back offices of small businesses. One commercial depicts a woman reviewing a bulletin board full of ideas in black-and-white. “The world doesn’t just wake up one day and give you success,” says a voiceover. “You have to take it. You have to own it.” As the woman takes ideas off the board and puts them into a Maxify printer/copier for a presentation document, the spot shifts to color and she picks up the document out of the tray in her new retail store. “You know that success without preparation? That’s just luck,” continues the voiceover. “And that makes what comes out of your printer more than just paper and ink. It’s the future of your business.” The spot concludes with the tagline, “Yours to make.”

In addition to the television campaign, Canon and 360i have also developed a print effort targeted at seven vertical industries, including retail, construction and legal. Messaging will focus on how the Maxify line helps these industries with their specific problems, as well as Canon’s “100 percent, U.S.-based service,” McCarthy says.

In addition to the advertising, Canon is entering into several media partnerships designed to show how the new Maxify line understands small businesses and start-ups. At a launch event in New York on Tuesday (hosted by Entrepreneur magazine), real estate mogul and “Shark Tank” investor Barbara Corcoran delivered a keynote around the theme of “Yours to Make.”

Other partnerships include taking over shared workspaces in various cities throughout the country in partnership with Forbes, and social content with small business influencers such as author Barry Moltz, DIYMarketers.com publisher Ivana Taylor and Duct Tape Marketing’s John Jantsch.

“Just doing advertising isn’t enough. Small business owners are busy,” McCarthy says. “We’re new to this industry too. We’re working with the right partners to make sure we know what they need to succeed and make things more efficient for them.”