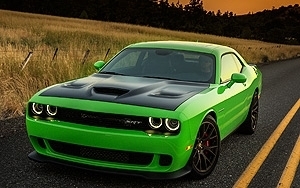 Texas is entirely jammed with pickups, as anyone knows who has stood on a highway overpass there. So no self-respecting pickup truck brand is a no-show at the State Fair of Texas in Dallas this month. The fair is the largest in the U.S., and brings in some 3 million people each year along with their $350 million or so, according to the fair’s organizers. It is also the only such event in the country that hosts a major automotive show, complete with vehicle debuts within the fair's 300,000-square-foot auto zone.

Certainly, for a lot of automakers the main focus really is on the trucks and SUVs -- sometimes exclusively. But Chrysler Group is bringing the kitchen sink down to Dallas for the fair, which runs Sept. 26 to Oct. 19. The Auburn Hills, Mich. division of Fiat Chrysler Automobile will have experiential programs and vehicles under its Chrysler, Jeep, Ram and Fiat brands.

For the first time, it is also bringing Dodge vehicles to the fair, mostly to tout the new Challenger SRT Hellcat. The car carries the largest engine Chrysler has ever made, clocking 700 hp. That should, theoretically, appeal to the "everything is bigger in Texas" mindset. The fair's mascot is a huge animatronic character named "Big Tex."

There will obviously be a large truck element with a "Truck Zone" with a virtual/real test drive, a real truck that one can "drive" as the virtual three-screen environment responds to the driver interaction with the controls. The Dodge brand will have a 2015 Charger with much the same engagement technology: a full-motion seat that "moves the driver inside the car to match the action displayed on the monitor outside of the car."

The automaker's Chrysler division, in the midst of pitching the new 200 sedan, is bringing that car to Texas as well, and even Fiat, counterintuitive for Texas, unless the 500 is actually on a pickup truck's flatbed, will have a presence there. There will be a live art exhibit sponsored by the brand every weekend with an Art Driven theme, where a Texas-based company will hand paint a design on a Fiat 500 1957 Edition model.

Not to be outdone, Chevrolet is official auto sponsor with title sponsorship of the Fair's main stage, which has something in the neighborhood of 85 performances over the course of the event. Other sponsors include State Farm, Walmart, Home Depot, Kroger, Sonic, Smirnoff, Bud Light, Bank of America and Coca-Cola.