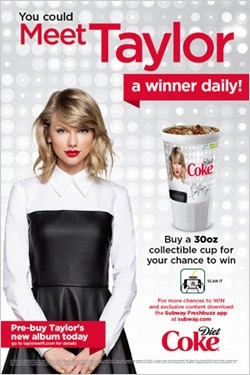 Subway is teaming with Diet Coke to offer Taylor Swift fans a sweeps and exclusive video content around the Oct. 27 release of her latest album, "1989."

The #MeetTaylor campaign includes a sweeps (Oct. 1-Nov. 15) offering daily drawings for a total of 46 trips-for-two to attend a concert and meet Swift during her 2015 tour. There are also 46 first prizes of packages that include a Taylor Swift guitar with a replica signature and other Swift swag. Entry is limited to U.S. residents 13 or older.

Fans can enter by purchasing a limited-edition, Swift-branded 30-ounce Diet Coke cup bearing a code, and entering the code on Subway.com, or scanning it by using Subway's Freshbuzz App. Those that use the free, downloadable mobile app — a portal for Subway news and celebrity content — will get an extra entry and access to the exclusive Swift video content, which will be refreshed weekly during October.

In the U.S., Subway is promoting the campaign in-restaurant and through TV, radio, social media and online channels that reach the Millennials who make up Swift's fan base.

The sweeps promotion that's taken over Subway's homepage also offers a link to Swift's site to preorder the album. In addition, Subway is promoting the album's release in its campaign marketing materials.

Swift, the best-selling digital music artist of all time, signed a long-term brand ambassador deal with Diet Coke in January 2013, which included the brand's being a sponsor of her tour for her last album, "Red." Swift's other brand partners in promoting that album included Papa John's, as well as Target, Walgreens, Keds, CoverGirl and Elizabeth Arden.

Diet Coke is expected to roll out more marketing timed around the new Swift album in coming weeks, as is Keds, and Target will offer a deluxe-edition exclusive, reports Billboard.

In its press release for the #MeetTaylor campaign, Subway is stressing that it's now the world's largest QSR in terms of number of locations. A banner at the top of its site boasts that the chain now has 42,743 restaurants in 108 countries.