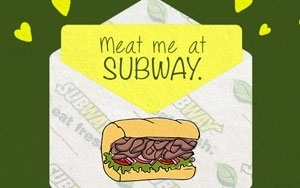 To reward and encourage fans to engage on National Sandwich Day on Nov. 3, @Subway (2.12 million followers) responded to sandwich-love tweets in real-time throughout the day with original gif and Vine "love notes."

All of the graphics featured illustrations of subs, accompanied by messages reminiscent of those on Valentine's Day candy hearts, like "B.M.T mine," "Lettuce be together" and "You warm my cold cut heart."

Subway got the ball rolling by posting a teaser gif on Nov. 2 ("Can't wait to share #NationalSandwichDay with you tomorrow. Stay tuned. Love, Subway), followed by a gif early on Nov. 3 featuring a photo of Subway brand ambassador Jared Fogle holding a blown-up sub-love note asking, "How much do you love subs?"

Subway engaged with its "Famous Fans" (e.g. Nastia Liukin) and "media influencers" (trainer-to-the stars Harley Pasternak and dietician Lauren Harris-Pincus), and with other social media influencers including @FallonTonight, Alex from Target and Jake from State Farm.

#NationalSandwichDay trended on Twitter during the day, and Subway also boosted its impressions by engaging with other brands that were tweeting about the "holiday," including Zagat, Smithsonian, UberFacts, RosettaStone, Emeril, FordFiesta, AAA, QSR Web, OnStar, DailyMeal and U.S. News Health.

This latest effort follows successes with similar Subway social gif campaigns earlier this year, starting with a Giphy activation around its JanuANY promotion that generated engagement roughly triple to its average, according to the brand.

Another effort, tied to a Sharknado 2 brand integration (including an appearance by Fogle), yielded two trending topics on Twitter for U.S. Subway ("Subway Jared" and "Eat Fresh"), and a nearly 100% increase in volume of Subway mentions. Amobee reported that Subway saw the greatest social media impact from the TV movie, with 17,000 tweets mentioning the brand.