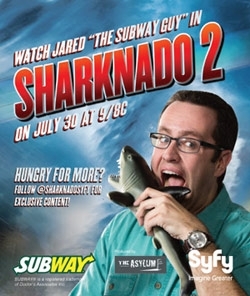 Over 16 years, brand ambassador Jared Fogle has appeared in uncounted ads, travelled the country making speaking engagements and press appearances, and run at least one marathon for Subway.

He's been parodied on shows including "Saturday Night Live" and "South Park," and had a cameo — along with stars like Johnny Depp — in a widely panned Adam Sandler movie ("Jack & Jill," 2011).

Now, in his second cameo, Fogle is fending off flying sharks in the sequel to the campy made-for-TV horror flick "Sharknado," which debuted July 30 on the SyFy network.

For weeks leading up to the premiere, Subway — which describes Fogle's appearance in "Sharknado 2: The Second One" and surrounding promotions as a "360-degree brand integration" — featured Sharknado-themed collateral in all of its U.S. stores.

Subway's social media team collaborated with SyFy to build excitement about the the movie and Fogle's cameo, and both @Subway and @thejaredfogle promoted the movie heavily on the day of its premiere.

During the premiere, Subway engaged with fans and "Sharknado 2" viewers with real-time, intentionally "cheesy" tweets. Example: " If we jumped into a freezing Sharknado wielding a chainsaw, we’d say 'Cold Cuts, anyone!?' But that’s us. #CheesySubLiners #Sharknado2"

In addition, during the film, @Subway and @thejaredfogle tweeted out Sharknado “survival tips” and rewarded fans with limited-edition sub swag like boogie boards, beach blankets and inflatable water wings.

Fogle also tweeted a tongue-in-cheek "proof of life" photo to confirm that he survived his ordeal.

During the movie, the promotion generated 1,666 retweets (including content that was put out by Fogle and promoted by Subway), 360 replies, and 3,082 favorites.

After the movie, @Subway was showing 16,400 tweets, up from 16,300 prior to the movie. The number of followers as shown on the account remained at 2.08 million.

"Subway Jared" reached #2 on Twitter's U.S. Trending Topics chart, and Subway gave away more than 75 prizes (its biggest "surprise and delight" effort to date, according to the brand).

Subway did not run traditional ads during the movie.