What Is Your Personal TV History? 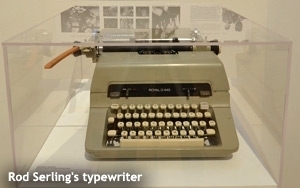 Each of us has a personal history that is unique to ourselves. But what about our personal TV histories?

TV critic David Bianculli, who has been writing about TV in one way or another for just shy of 40 years, is taking a whack at the concept of “a personal TV history” by putting his own TV history on display for all to see.

The result is a unique gallery exhibition in Manhattan’s Tribeca titled “Bianculli’s Personal Theory of TV Evolution.” The show opened yesterday (Nov. 6) and runs through Dec. 20. Admission is free for anyone who happens to stroll by this gallery, called Apexart.

Visitors who step inside will come upon an exhibition of iconic objects that are rarely seen in New York -- objects that Bianculli wrangled for this show because of his long ties with the people who own them, and because of their significance as mile-markers in his own personal TV history.

Among the artifacts: Rod Serling's typewriter (a Royal 440), one of Fred Rogers’ cardigan sweaters (zippered, of course), and the actual snow globe used in the famed series finale for “St. Elsewhere” in 1988 (the one that signaled that the whole series had been the product of an autistic boy’s imagination).

Other objects include posters, wall art and other promotional items that Bianculli received -- and subsequently kept -- in his many years as a TV critic, including stints at the Philadelphia Inquirer, New York Post and New York Daily News.  He’s the in-house TV critic for NPR’s “Fresh Air with Terry Gross,” which he also guest-hosts.  He teaches TV and film history at Rowan University in Glassboro, N.J.

It all adds up to a personal history of television -- Bianculli’s -- which happens to include an ancient TV set from the 1950s that he says was the first one his father ever bought.  It is also on display in his “Theory of TV Evolution” exhibition.

Few of us still possess our parents' or grandparents' first TV sets.  And few of us can claim to have been on the receiving end of so many promotional items from the TV networks for as many years as David Bianculli, who seems to have retained a great deal of it.

I have been a journalist on the TV beat for 30 years, but along the way, I discarded all but a few of the hundreds of items --  from apparel to bobbleheads -- that I received over the years.  Just about all that's left is a talking Urkel doll, a Mr. T action figure and a bendable Bart Simpson.  The item I most regret discarding: A “Chevy Chase Show” pillowcase that Fox produced to promote Chase’s late-night show, possibly the most notable TV failure of the 1990s.

For each of us, TV is a personal thing.  In the exhibition David Bianculli has curated, clips of the shows that meant something to him personally and professionally play on TV screens all over the room.  They range widely, from “The Ernie Kovacs Show” to “The Smothers Brothers Comedy Hour” to “The Late Late Show with Craig Ferguson” and dozens in between.

“I’m taking the ‘Personal’ part of the title very seriously,” he writes in an essay composed for the exhibition.  “As a TV critic, some of the connections I make, and some of the video snippets I showcase, are highly personal indeed.  …  I’m exploring, explaining and confessing my own lifelong relationship with television.”

A lifelong relationship with television.  It's something we all have -- whether or not we watch TV for a living. While taking in this exhibition the other day, I began to think of my own TV history and the earliest TV shows I can remember watching -- “Batman,” “Voyage to the Bottom of the Sea,” “Sea Hunt,” “Lost in Space,” “Daniel Boone,” “The Monkees.”

I began to think about the shows that came to mean something to me as I grew older -- “All in the Family,” “The Mary Tyler Moore Show,” “The Bob Newhart Show,” “The Carol Burnett Show,” “Good Times,” “Hill Street Blues.”

For the first time in years, I remembered that I had a particular affection for the made-for-TV movies produced for ABC for its “Movie of the Week” series in the 1970s.  I even remembered the names of some of them and the people who were in them, though I had not thought of them in decades -- Jan-Michael Vincent in “Tribes” (1970), Dennis Weaver in “Duel” (1971), Robert Culp in “Outrage” (1973), Dale Robertson in “Melvin Purvis, G-Man” (1974), Martin Sheen in “The Story of Pretty Boy Floyd” (1974).  Who but me remembers this stuff?

Bianculli says that understanding his personal TV history helps him understand himself.  “By putting the pieces of my history with TV in one place, I understand my own puzzle a little better,” he writes.

It's a very intriguing idea: That a thoughtful consideration of one’s own TV history can help unlock the secrets of the self.  Does anyone else think this is true?