Bottoms Up! 'Sons of Anarchy' Sex Scene Bares All 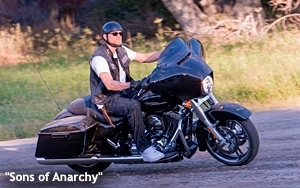 Is there anything they can’t show on TV these days?

Technically, there is plenty they can’t (or won’t) show, at least on what has long been known as “advertiser-supported” TV. They don’t show genitalia, for example (at least, not yet) -- although some TV shows have come pretty darn close recently.

And come to think of it, unless I’ve missed it, the female nipple has yet to make an appearance on commercial television (to paraphrase, if not alter, a line of dialogue from an old “Seinfeld” episode).

What triggers this discussion? The jaw-dropping sex montage that opened last night’s episode of “Sons of Anarchy” on FX -- which, the last time I looked, was still a commercial-supported TV network. All I can say is: Holy cow!

This highly graphic tour of the intimate sex lives of the "Sons of Anarchy" motorcycle club members and their associates got underway at 10 p.m. (eastern time) on Tuesday night. This sequence was two-and-a-half minutes in length, and featured seven couples in the act of intense lovemaking.

To take this inventory further (because I know you are dying to learn the details), this montage featured five heterosexual couples, and two homosexual -- one of which featured the transgender character whose portrayal should win actor Walton Goggins an Emmy Award, and the other one featuring a jailhouse rape being simulated by guest-star Marilyn Manson (TV just gets crazier everyday, doesn’t it?). Oh, and by the way, one of the other couples was, um, demonstrating their “love” for each other on the hood of a car (I think).

This particular sequence served to prove that you don’t really have to show actual genitalia to get your point across -- especially if your “point” is to produce a sequence of film, depicting various couples in the act of lovemaking, that you can get away with on TV.

For the record, this sequence left nothing to the imagination. It was probably the rawest sex I have ever seen depicted on TV outside of HBO and Showtime -- and that’s saying a lot.

If showing full-frontal genitalia on TV is still taboo, then you might also come to the opposite conclusion when it comes to showing people’s bare bottoms. That’s a bit of nudity that was once shocking (going back as far as Dennis Franz baring his derriere on “NYPD Blue”), but today doesn’t shock most people, evidently.

Among those who put their backsides on display Tuesday night on FX: “Sons of Anarchy” star Jimmy Smits, who once co-starred on “NYPD Blue.” Lookin’ good, Jimmy!

Not too long ago, rear ends on TV were tastefully pixilated, at least a little. But today, the pixilated rear end is a thing of the past. That’s due at least in part to all of the reality shows that have cropped up recently with the word “Naked” in their titles – “Naked and Afraid” on Discovery and “Dating Naked” on VH1, to name just two of them.

These shows have no problem showing their participants from the rear without strategically placed pixels. To my knowledge, these shows have never bared anyone’s genitalia, at least on purpose, although one participant on “Dating Naked” claims they bared hers and she sued.

Shame on you, VH1, for showing someone naked on this naked dating show after she signed all the necessary papers in which she agreed to be naked -- only not that naked, apparently.