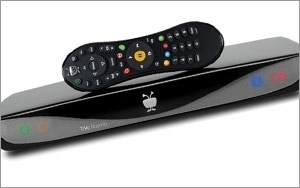 TiVo pulled in $118.4 million in revenue — up 1% from a year ago — with revenue from its services and technology business up 7.8% to $88.1 million. TiVo now has 5.1 million subscribers compared with 3.9 million a year earlier and 4.8 million in the previous quarter.

Net income was cut in half — to $6.3 million, down from $12.5 million in the comparable period and missing analysts' estimates. Still, its cash flow — adjusted earnings before interest, taxes, depreciation and amortization — was at $27.7 million, up 16%.

TiVo made revenue gains of 37% from deals with pay TV providers, who delivered 3.6 million TiVo subscribers. Revenue of TiVo hardware — its stand-alone set-top box machines — dropped 15% to $30.4 million during the period. Sales and marketing costs were at $10.5 million — about the same versus $10.2 million