They Is Gone, But Not Forgotten

Earlier this month, Amsterdam-based agency They found itself without a third call. While promising agencies come and go, the demise of They is more than just a cautionary tale of how precarious the ad agency world really is. It may be reflective of a fundamental shift in what it means to be an agency -- or in this case, not -- in a post-advertising world.

"The whole traditional model doesn't work anymore. It's less about creativity and more about business results. There is not a lot of room to be creative,” They Founder Patrick van der Gronde tells MAD after shuttering the agency, which will be remembered for its thought-provoking creative, if not its business result.

“The money has to go to other things,” Gronde explains, adding: “And you end up spending most of your time on administrative tasks and pitches and not enough time working with clients."

Founded in 2005 by van der Gronde and Roland van der Vorst, Kim Dingler and Sander Bakker, They had its run as one of the hottest up-and-comers in the Amsterdam advertising scene. The agency landed major accounts early on, including Vodafone's Dutch business, Reebok Women's Running for Europe and ING Wholesale Banking.

Last year the agency went global, garnering international buzz for its work for the Digestive Diseases Foundation, which helped raise awareness about colon health with an eye-catching mobile app and poster campaign that got right to the bowel of that matter, advocating that consumers check their excrement for early signs of health problems.

The campaign nabbed several awards, including Ad Age’s First International Small Agency of the Year in 2009. Talent began pounding on They’s doors, and the agency expanded to nearly 50 people at its peak in 2011.

That’s when They began experiencing growing pains. Cash flow began to crunch as clients started delaying payments past 120 days, and the agency found itself more focused on staying afloat than floating big ideas. Clients that helped the agency catch fire ended up being part of its financial demise.

The problem isn’t unique to They. Many smaller agencies experience similar challenges as they pitch big business to scale and grow their team and their capabilities. They problem is that it’s difficult to create a safety net when they experience turnover, leaving the shop with top-heavy payroll that isn’t sustainable.

"In a perfect world, I would have an agency with a staff of 15," van der Gronde says in retrospective. "But with big clients come big demands and we needed 40."

Although all client departures were unwelcome, Vodafone's and Aegon Insurance's departures proved to be death blows.

"We continued to pitch and if we won one,” van der Gronde says of They’s new business efforts, “perhaps we could have sustained a little bit longer.”

But that didn’t happen and They posted a final message on its now defunct Web site, concluding: “They started out with nothing and still got most of it left.”

“If you fight for honesty and transparency in communication you have to practice what you preach," van der Gronde explains, add 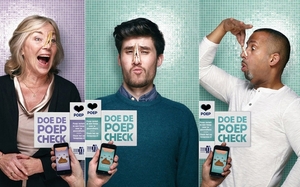 ing: "A bankruptcy campaign was our last one -- who would have thought that, before an Amsterdam courthouse judge and curator declared They to be bankrupt."

Speaking of its bankruptcy campaign, van der Gronde says, "we wanted to go out in style, like Don Draper."

And while it was intended to be somewhat tongue-in-cheek, They’s final campaign also succumbed to bankruptcy. Shortly after publishing, the court took over its assets, including the Web site, and pulled down all of the content.

Now, van der Gronde is focused on winding down the agency. He expects it will take about a year to settle everything. Some 15 people stayed through the end and are now looking for work.

As for van der Gronde, he says he wouldn't do anything differently, and although looking forward, he isn't sure whether he wants to join another independent agency or work for a larger holding company. "I spent 10 years at KesselKramers and seven years [at They]. I am open to anything. I am happy to finally look up again and be inspired by others."

He might even try launching a new company that serves as a combination production shop and ad agency. Above all, he is excited to focus less on administrative matters and get back to being a true creative.

“Looking forward to all the new possibilities and that makes me excited. I have never learned as much as in the past six months so that's worth something. And I have learned a lot about myself," says van der Gronde. His new email is pat@lessagency.nl

1 comment about "They Is Gone, But Not Forgotten".
Check to receive email when comments are posted.
Next story loading