Is This The Era Of Collegiality In Late-Night TV? Let's Hope Not 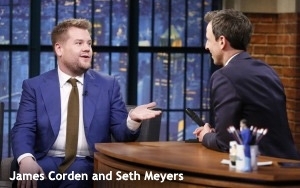 This week represents a watershed in late-night TV that foreshadows another round of dramatic changes in the time period in the coming year.

On Friday (Dec. 19), Stephen Colbert signs off from “The Colbert Report,” Craig Ferguson says good-bye to “Late Late Show,” and David Letterman will have his last Christmas show (featuring, as usual, appearances from Jay Thomas and Darlene Love).

Next year, Colbert takes over for Letterman (in May) and Ferguson, a Scotsman, will be replaced by an Englishman, James Corden (in March). “The Nightly Show with Larry Wilmore” replaces “The Colbert Report” in January on Comedy Central.

The network with the most riding on the upcoming shifts is CBS, which is choreographing host changes on both of its late-night shows -- essentially remaking the entire time period after a decade of stability (Ferguson started his run in January 2005).

Of course, CBS’s effort is made all that much easier by NBC playing nice-nice. As some TV columnists have already observed -- such as in this Entertainment Weekly column -- peace seems to have broken out in the late-night wars -- so much so that at least superficially, you can’t even call them wars anymore.

Behind the scenes, however, I’m sure there is still a war -- for guests, for sponsors, for viewers, for money. On the surface, however, late-night TV has become so lovey-dovey that it has become unrecognizable.

Jon Stewart and Colbert are colleagues and friends. Jimmy Fallon apparently loves Colbert too. They’re known for breaking into elaborate song-and-dance numbers when Colbert appears on “The Tonight Show.” Fallon supposedly gets along with Jimmy Kimmel too. Conan O’Brien is everyone’s pal. And all of them adore Letterman (although he probably couldn’t care less about any one of them).

I couldn’t believe my ears.

“I’m very excited by this!” Meyers babbled. “You’re taking over the ‘Late Late Show’ in March! I’m so excited! I’ve been such a fan of yours for so long! I just think you’re going to be great at it!”

Really? He’s been a fan of Corden’s? I’d be surprised if he’d even heard of Corden before last month.

On the other hand, maybe Meyers should be excited. Corden is a virtual nobody in the United States, so Meyers needn’t worry about him as a competitor. Still, for the life of me, I can’t understand why the powers that be at “Late Night” felt they should welcome Corden as a guest. Not too long ago, such a thing would not have even been considered.

I realize Corden was booked ostensibly to promote the movie he’s in, “Into the Woods,” but naturally the conversation would turn to the subject of late-night as well -- giving Corden ample opportunity to promote a show that would compete with the very show he was appearing on. Sorry, but these instances where one late-night host welcomes another as a guest just don’t seem logical to me.

For one thing, I’m much too jaded to even accept that these people are “friends.” And yet Corden said last night on “Late Night” that Meyers was the first person to e-mail him congratulations when the news broke that Corden would be taking over for Ferguson on “Late Late Show.” Really? The first one?

“The first person to send me an e-mail saying ‘this is amazing! I’m so excited for you!’ was from this man here, and then to have me on the show … It’s overwhelming how unbelievably kind you are!” Corden gushed.

Is this the best we can expect from this “new” generation of late-night hosts? Kindness? To each other? Really?

During their interview, I thought to myself: What’s with all of these statements about how “excited” they are? That’s the insincere language of prepared statements I encounter every day in press releases. It’s not how people really talk.

I was silently hoping Meyers would suddenly say something like: “I can’t believe we booked you on my show, which you’re going to compete with starting in March. Get the hell out of here!”

What an opportunity to actually make a headline for a guy like Meyers, who’s about as interesting as a glass of water.

Who knows?  Maybe Corden can make some inroads against Meyers. As for Fallon, the multitalented Colbert, with his millions of fans and followers, is well-positioned to give him a run for his money.

We’ll see how friendly everyone really is in a few months.

tv
4 comments about "Is This The Era Of Collegiality In Late-Night TV? Let's Hope Not".
Check to receive email when comments are posted.
Read more comments >
Next story loading