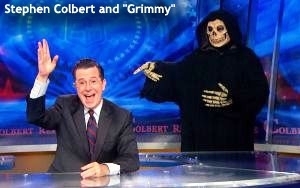 The centerpiece of Colbert’s final “Report” (pronounced “Re-pore” -- the “t” is silent) was an elaborate performance featuring literally scores of celebrities and former guests all singing “We’ll Meet Again,” a song from 1939 that became one of the iconic sentimental favorites of World War II. This clip is really a must-see piece of video.

The song lasted for roughly six minutes, during which the “Colbert Report” stage became gradually more crowded with a staggering array of participants representing the worlds of show business, politics, journalism and academia. The scene eventually became so densely populated that a TV columnist could no longer make an accurate inventory of the attendees, since so many of them were by then standing behind others and could not be readily identified.

Eventually, some celebrities and other well-wishers who apparently couldn’t make it to the show’s Manhattan studio for this taping were seen on tape, including a group of American troops in Afghanistan, an astronaut running on a treadmill inside the International Space Station and President Clinton.

Perhaps the best and most surprising star appearance in the entire half-hour farewell episode was “Jeopardy!” host Alex Trebek, who took Colbert on an interstellar sleigh ride with Santa Claus and Abraham Lincoln.

This song performance, plus some other ancillary antics such as the appearance of Colbert’s pal, The Grim Reaper (nicknamed “Grimmy”), brought the curtain down on the remarkable nine-year run of “The Colbert Report.”

This was a show that stood apart from the rest of them in late-night television because it was the only one in which the “host” was really an actor playing a role -- in Colbert’s case, a parody of a pompous, flag-waving, cable news pontificator (inspired, at least loosely, by Bill O’Reilly).

Colbert remained committed to the role of “Colbert” to the very end. “In the annals of history, or whatever orifice they stuff it in, let no one say what we did together was not important or influential or importulential,” he said, addressing the audience in the studio and those watching at home.

Colbert played “Colbert” magnificently and over the years, he cultivated millions of fervent and loyal fans who will likely follow him to CBS when he takes over for David Letterman next year. He won’t be playing the same role, however. Instead, he’ll be playing the “real” Stephen Colbert, which has some people questioning whether he can make the transition to playing himself.

As a fervent fan myself, I have a feeling he’ll have no problem at all.