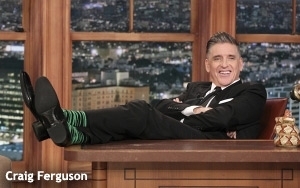 Craig Ferguson went out with a bang Friday night with a show-stopping musical number that managed to top the week’s other late-night finale seen just one night earlier -- Stephen Colbert’s farewell to “The Colbert Report” on Comedy Central.

Ferguson and his producers shrewdly used this lavishly produced farewell performance to open the final edition of Ferguson’s “Late Late Show” on CBS. This four-and-a-half minute production featured Ferguson first lip-synching to a song called “Bang Your Drum” by the Scottish band Dead Man Fall and then finishing the song in his real voice while standing on his “Late Late Show” desk.

The segment had it all, including dozens of Ferguson’s celebrity friends seen on tape banging drums and bongos mashed up with clips of fun moments from Ferguson’s 10-year run on “Late Late Show.” The song itself felt triumphant, tribal and very Scottish.  And it managed to raise the heart rate of Ferguson’s studio audience and, presumably, those watching at home.

It set the stage for a Ferguson finale that was everything a farewell late-night show should be -- sentimental (but not too much), entertaining and creative.

“What I hoped we’ve done, what I was trying to do here and what I think that we managed to do here was make something that wasn’t here before,” Ferguson said humbly in his final monologue, in which he gave more or less equal thanks to both his production staff and his fans.

Indeed, Ferguson carved out his own unique niche in late-night TV with a style all his own. A Scottish actor who was previously best known in America for playing a supporting role on Drew Carey’s ABC sitcom, and who had never hosted a TV talk show before, Ferguson became famous for delivering monologues in which he eschewed the familiar late-night pattern of straight-ahead joke-telling in favor of (seemingly) free-form speech-making. And his fans loved it.

On his final show, Ferguson, 52, said he decided to quit “Late Late Show” for the simple reason that he had begun to feel recently that he had run his course on late-night television (his first show was just shy of 10 years ago, on Jan. 3, 2005). His sole in-studio guest -- Jay Leno, with whom Ferguson has formed a close bond over the years -- was empathetic, admitting that he too had begun to feel the same way in his final months at “The Tonight Show.”

Neither man mentioned other possible reasons for leaving their shows -- in Leno’s case, unrelenting pressure from higher-ups at NBC to relinquish the job so they could install Jimmy Fallon; and in Ferguson’s case, the fact that he was not seriously considered (if he was considered at all) to replace David Letterman on CBS.

Friday’s “Late Late Show” was neither the time or the place to go into all of that anyway, for there was one more bit to do -- a concluding sequence that paid homage to the three most famous TV series finales of all time: The “Newhart” show’s “dream” finale, the snow-globe ending of “St. Elsewhere,” and the sudden fade-to-black final scene of “The Sopranos.” The Ferguson show even used the same Journey song, “Don’t Stop Believin’,” heard in the “Sopranos” finale.

All in all, the work that went into assembling all of the pieces for this final episode of “Late Late Show with Craig Ferguson” was breathtaking. For that matter, so was the effort that was apparently expended to give Colbert the send-off seen last Thursday night on “The Colbert Report,” in which dozens of Colbert’s friends and former guests were all corralled into singing “We’ll Meet Again” in a performance that filled his studio, spilled outside onto the sidewalk and even stretched into outer space.

Both farewells -- Colbert’s and then Ferguson’s -- were wonders to behold -- and further proof that at least sometimes, we really are experiencing a new golden age of television.

tv
1 comment about " Ferguson Bangs A Drum Fiercely In Fearless Farewell".
Check to receive email when comments are posted.
Next story loading