Over 80% Of All Industry Players Used Programmatic In 2014 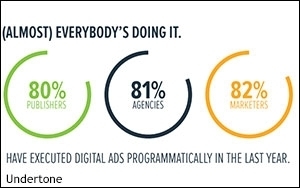 Corroborating other reports detailing programmatic’s widespread use, Undertone has released survey results showing that over 80% of publishers, agencies and marketers have all executed digital ads via programmatic in the last year. Other reports have pegged the figure as high as 90%, and local publishers may be a little bit behind at 62%, but all the reports seem to indicate that in 2014, over three-fourths of the entire marketplace used programmatic for digital advertising.

Banners still dominate the industry, with over 85% of all players using programmatic to execute banner trades. However, mobile is now used by over 60% of the market, pre-roll by about 50% and native by about 20%, per Undertone’s study.

“Programmatic is finally moving beyond display,” writes Undertone in its report, which can be found here. “Marketers and agencies are going beyond the banner, buying a variety of ads products programmatically, and publishers are doing their best to supply all of them. There’s a strong market for programmatic mobile, pre-roll, and high impact; native also may be just emerging as a programmatic option. In summary: if an ad unit exists, there’s programmatic demand for it. But as brand dollars move from display to larger, more brand-focused units such as high impact, quality inventory becomes more crucial than ever.”

The industry has, however, been lacking in the quality department. Viewability is the market's chief concern heading into 2015, and ad fraud is not far behind. Even unmalicious quality issues, such as “misaligned” pre-bid data, reportedly impacts a large portion of RTB ads, namely in video.

Undertone found its respondents to be more concerned about brand safe environments, however, with over 40% of marketers and agencies saying finding suitable environments is their number one safety and quality concern when buying via programmatic. About 25% of said viewability was their chief concern, while another roughly 25% cited fraud.

Undertone surveyed 425 agency members, 170 marketers and 159 publishers for its report. The study was conducted online between October 21 and November 3, 2014, and respondent incentive included gift cards, charitable donations and early access to the results.