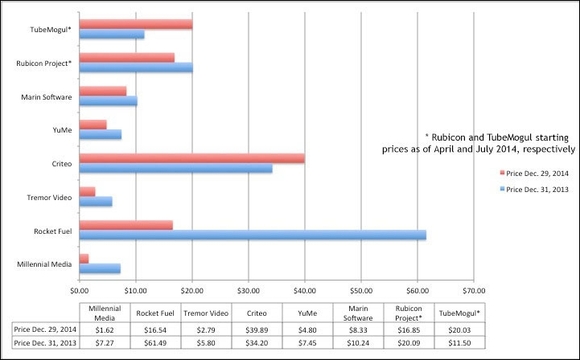 While there was a flurry of “exits” in the ad tech space in 2014, most came in the form of mergers and acquisitions, and only a handful of large companies in the space went through an IPO -- namely Rubicon Project and TubeMogul.

It’s possible that companies sought buyers rather than IPOs because of the track record that current publicly traded ad tech firms are putting together.

At the end of 2013, if one were to buy one share each from eight large public ad tech companies -- Millennial Media, Rocket Fuel, Tremor Video, Criteo, YuMe, Marin Software, Rubicon Project and TubeMogul -- it would have cost $158.04 (Rubicon and TubeMogul didn’t go public until April and July 2014, respectively, but we included their day-one prices nonetheless).

TheWall Street Journalcompiled a roundup of the declining stock prices of public ad tech companies midway through 2014, noting that Rocket Fuel, Tremor, Criteo, Yume, Millennial Media and Rubicon project were all down at least 13% on the year (as of June 2014).

Only Criteo has been able to turn that around. TubeMogul, which went public after the WSJ’s roundup, is also up on the year.

As previously noted, TubeMogul (up 74.2% after trading began in July) and Criteo (up 16.6% since beginning of the year) are in position to close 2014 in the green; however, both of those companies have questions as well.

TubeMogul has been public for just half a year, and its stock price was relatively flat until mid-October. And while Criteo is up over 15% on the year as a whole, its shares nearly reached $60 at the beginning of March before falling to $25 just two months later.

M&As trumped IPOs in 2014, not just in “success” and volume, but in intrigue. The giants came to play this year, as Google, Facebook, Twitter, Yahoo, AOL and others all made noteworthy acquisitions, some of which were in the hundreds-of-millions of dollars price range. The tech and data arms race is underway.